Acanthostega (meaning "spiny roof") is an extinct genus of stem-tetrapod, among the first vertebrate animals to have recognizable limbs. It appeared in the late Devonian period (Famennian age) about 365 million years ago, and was anatomically intermediate between lobe-finned fishes and those that were fully capable of coming onto land.

Acanthostega appears in Jurassic World: The Game as a tournament creature. 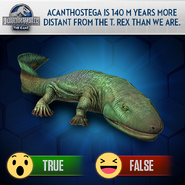 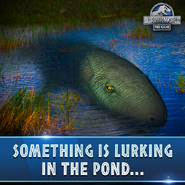 Retrieved from "https://jurassicpark.fandom.com/wiki/Acanthostega?oldid=219324"
Community content is available under CC-BY-SA unless otherwise noted.