Agujaceratops (meaning "Horned face from Aguja") is a genus of herbivorous ceratopsian dinosaur. It is a chasmosaurine ceratopsian which lived during the Late Cretaceous period (late Campanian stage) in what is now Texas. Originally known as Chasmosaurus mariscalensis and described by Lehman in 1989, it was moved to a new genus by Lucas, Sullivan and Hunt in 2006. Lehman felt the habitat Agujaceratops lived in (at least where the fossil material was found) may have been a swamp, due to the nature of the sediments. Lehman, Wick & Barnes (2016) described a second species, Agujaceratops mavericus.

The skull displayed in Lockwood Manor appears to be a mix of Agujaceratops and another genus. While the plague digitally displayed Agujaceratops[1], production designer Andy Nicholson confirmed it was one of two they combined to create a new, fictional genus.[2][3]

The hybrid dinosaur Indoraptor, while fighting Blue the Velociraptor on the glass roof above the skull, falls on the skull and dies from being impaled on the horns.[4] 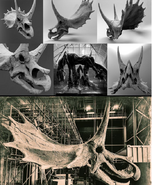 Retrieved from "https://jurassicpark.fandom.com/wiki/Agujaceratops?oldid=213242"
Community content is available under CC-BY-SA unless otherwise noted.