It is an Arena Exclusive creature unlocked in the Fallen Kingdom Arena.

A level 15 Alanqa can fuse DNA with a Level 15 Ankylosaurus GEN 2 to create DNA for the hybrid Alankylosaurus.

The lance-like bill of the Alanqa has been compared to the bill of the Great Blue Heron and other large, fish-eating birds. The Alanqa is particularly adept at using its bill to strike quickly at its targets and escape before retaliation. 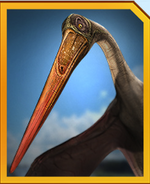 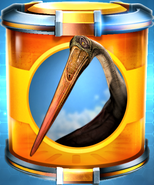 Add a photo to this gallery
Retrieved from "https://jurassicpark.fandom.com/wiki/Alanqa/JW:_A?oldid=219280"
Community content is available under CC-BY-SA unless otherwise noted.