Jurassic Park: Operation Genesis (cut)
Alioramus ("different branch") is a genus of tyrannosaurid theropod dinosaurs from the Late Cretaceous period of Asia. The type species, A. remotus, is known from a partial skull and three foot bones recovered from Mongolian sediments which were deposited in a humid floodplain about 70 million years ago. These remains were named and described by Soviet paleontologist Sergei Kurzanov in 1976. A second species, A. altai, known from a much more complete skeleton, was named and described by Stephen L. Brusatte and colleagues in 2009. Its relationships to other tyrannosaurid genera are unclear, with some evidence supporting a hypothesis that Alioramus is closely related to the contemporary species Tarbosaurus bataar.

Alioramus were bipedal like all known theropods, and their sharp teeth indicate that they were carnivores. Known specimens were smaller than other tyrannosaurids like Tarbosaurus and Tyrannosaurus rex, but their adult size is difficult to estimate since both species are known only from juvenile or sub-adult remains. The recent discovery of Qianzhousaurus indicates that it belongs to a distinct branch of tyrannosaur. The genus Alioramus is characterized by a row of five bony crests along the top of the snout, a greater number of teeth than any other genus of tyrannosaurid, and a lower skull than other tyrannosaurids.

Alioramus was planned for Jurassic Park: Operation Genesis until it was cut, possibly in favor of Albertosaurus.

A concept design of the Alioramus figure revealed

An Alioramus in the Jurassic World Facts app 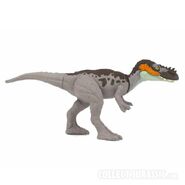 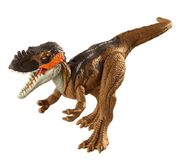