Alpha 06 is a dinosaur boss from Jurassic World: The Game. It is a grey and orange Tyrannosaurus rex with bone-like spikes running down its back, and orange, flame like veins flowing through its body. It is capable of pulsing electricity when it attacks, steps, roars, or gets up. It is unknown if Alpha 06 is a hybrid or a genetically enhanced T. rex. It does, however, look very similar to Omega 09.

Alpha 06 begins with 4,596 HP and 209 damage per hit, the same as Omega 09. Each time it is beaten, it revives with doubled HP and damage. This cycle will repeat until all dinosaurs in the player's party are defeated, as he cannot be beaten. The purpose of the fight is to deal as much damage as possible, as doing so would unlock the special Alpha 06 statue pack. 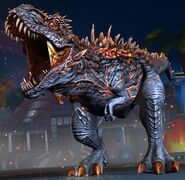 Retrieved from "https://jurassicpark.fandom.com/wiki/Alpha_06?oldid=215526"
Community content is available under CC-BY-SA unless otherwise noted.