Amber is fossilized tree resin, which is appreciated for its color and beauty. Good quality amber is used for the manufacture of ornamental objects and jewelry. Although not mineralized, it is often classified as a gemstone. Semi-fossilized resin or sub-fossil amber is known as copal.

Amber occurs in a range of different colors. As well as the usual yellow-orange-brown that is associated with the color "amber", amber itself can range from a whitish color through a pale lemon yellow, to brown and almost black. Other more uncommon colors include red amber (sometimes known as "cherry amber"), green amber, and even blue amber, which is rare and highly sought after.

A lot of the most highly prized amber is transparent, in contrast to the very common cloudy amber and opaque amber. Opaque amber contains numerous minute bubbles. This kind of amber is known as "bastard amber", even though it is in fact true amber.

InGen in general and John Hammond in particular were said to have bought most of the biggest amber mines in the world, but with an unknown purpose for doing so. As in the movie, it was later shown that InGen was mining the amber in the hopes of finding viable dinosaur DNA to use in its cloning process. This was through scientific processes being developed by InGen's team, with much input from Hammond's protege Henry Wu. Though simplified in an educational-style video shown to the Park's first visitors, the process was basically to search for blood-sucking insects from dinosaur specific periods such as mosquitoes, gnats, and others which had been trapped inside amber, which hardened and preserved the blood in their bodies. This amber could then be drilled into and the blood could be extracted and used in cloning.

The formation of amber is briefly explained by Mr. DNA:

A common misconception is that amber is made of tree sap. Sap is the fluid that circulates through a plant's vascular system, while resin is the semi-solid amorphous organic substance secreted in pockets and canals through epithelial cells of the plant.

Overlying sediment causes high pressure and temperature that hardens the resin into copal. Sustained heat and pressure drives off terpenes and results in the formation of amber.

Because it used to be soft and sticky tree resin, amber can sometimes contain insects and even small vertebrates.

"Paleo-DNA? From what source? Where do you get 100 million year old dinosaur blood?!"
—Ellie Sattler(src)

The presence of insects in amber was noticed by Pliny the Elder in his Naturalis Historia and led him to the theory that at some point, amber had to be in a liquid state to cover the bodies of insects. Hence, he gave it the expressive name of succinum or gum-stone, a name that is still in use today to describe succinic acid as well as succinite.

In all Jurassic Park media, dinosaur DNA is found in yellow amber. This can only be done if dinosaur cells would be present in amber. In the novels and films, dinosaur cells are present inside mosquitoes that had just fed on dinosaurs. An alternative suggestion is that dinosaur tissue could have ended up in amber.

In the Jurassic and Cretaceous Periods the existed insects that fed on dinosaurs. The theory is that if such an insects got stuck in amber, the dinosaur blood was preserved. Blood contains red and white blood cells, which contain nuclei with DNA.

The mosquito had to have had just one species of dinosaur as its food source to avoid a mix-up. Since some species of mosquito have a female lifespan of only a few days and tend to lay eggs following each feeding, this is semi-plausible, though in that case dozens of mosquitoes of different species would have to be found in order to recreate as many kinds of dinosaurs.

Scientists DeSalle and Lindley criticised this idea. According to them the cells and DNA are broken down by nucleases in the mosquito gut before the amber stops all cellular processes in the insect. Bacteria in the insect's gut would break down the DNA. Many insects extracted from amber have been found to be completely hollow.

In 2004 the Poinars published that they had discovered intact nucleated blood cells from reptiles in the gut of a Sandfly encased in Cretaceous amber.[1]. In 2013 scientists analyzed the fossilized blood meal of a mosquito from the Eocene Kishenehn Formation (oil shale) in Montana. The meal contained very high levels of iron and remains of porphyrin molecules derived from the oxygen-carrying hemoglobin.[2] These findings prove that remains of a blood meal can survive in an insect's gut. Paleontologist Dr. Briggs discussed the latter discovery in his article A mosquito’s last supper reminds us not to underestimate the fossil record. Briggs said that "the well-fed mosquito from the Eocene... force(s) us to revise our ideas about the limits of fossilization. Investigating the conditions of preservation indicate what new information might result from future excavation and collecting, and novel applications, emphasize how future technological advances will yield data that we cannot yet imagine."[3]

DeSalle and Lindley proposed the idea that dinosaur tissue could end up in amber without the need of insects. Imagine that a tree fell on top of a dinosaur. In a fight a dinosaur is pushed against a tree. In a fight pieces of dinosaur are raining against a tree. A scavenger is ripping flesh out of a carcass and the pieces are flying around. A small dino tries to flee into a tree and is wounded by a branch.

Reptilian tissue from the Mesozoic Era has been found in amber. In 2002 skin fragments of a Baabdasaurus lizard was discovered in 120 million year old Lebanese amber.[4] In 2005, fragments of reptile skin were found in Cretaceous amber from France [5].

Feathers, belonged to non-avian theropods, are found in cretaceous amber of France[6] and Canada.[7]

To clone marine animals, marine parasites should be preserved. Scientists have discovered a menagerie of perfectly intact marine micro-organisms trapped in Cretaceous amber (100 myo). The most likely scenario is that the forest producing the amber was very near the coast. The tiny organisms, largely made up of prehistoric plankton, were either carried inland by strong winds or flood waters during a storm.[8]. 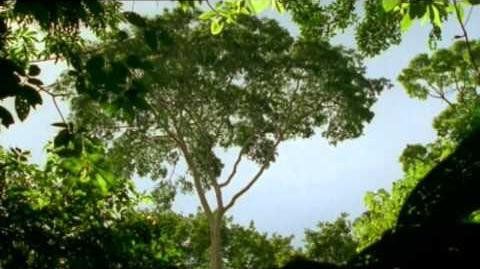 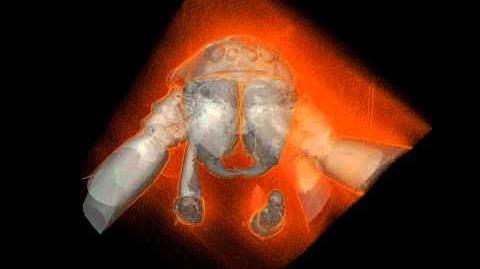 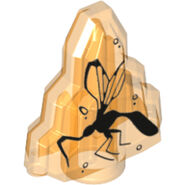 A brick of Amber from LEGO Jurassic World.