Amebelodon is an extinct relative of the elephant that lived in North America during the late Miocene. The most striking attribute of this animal is its lower tusks, which are narrow, elongated, and distinctly flattened with the degree of flattening varying among the different species.

It appears as a limited edition herbivore in Jurassic Park: Builder. 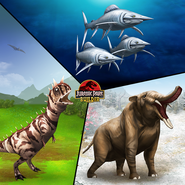 Retrieved from "https://jurassicpark.fandom.com/wiki/Amebelodon?oldid=238198"
Community content is available under CC-BY-SA unless otherwise noted.