9 tons
Ankyloranodon is a genetic combination of the flying Pteranodon, and the armored Ankylosaurus.

Like a flying tank, the Ankyloranodon was specifically engineered to attack large ground-based carnivores. Lethal spikes and spines on its back and head add protection, while its tail provides a dangerous and valuable weapon. Capped by a large, spike-laden ball, the tail is perfect for quick and lethal airborne strikes. The Ankyloranodon is an intelligent and cunning predator. But unlike its Chaos Effect relatives, it hunts only when its hungry, and kills only what it can eat. Its beak can also be used as a deadly, curved weapon to eat and kill. 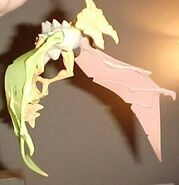 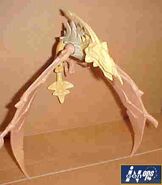