"The Ankylosaurus. This is a herbivorous quadruped. Late Cretaceous. This is one of the largest armored dinosaurs. Known by paleontologists as a living tank."
—Gunnar Eversol introducing an Ankylosaurus to auctioneers(src)

Ankylosaurus was built like a living tank, with extremely thick, bony plates of armor on its body, even including armored eyelids. Its tail also had a second function; it could act as a deadly club. The club was used to swing around and smash into an attacking dinosaur. Its club was so daunting that not even a Tyrannosaurus rex would want to mess with this alarming species.[1]

As a defensive creature, Ankylosaurus was one of nature's most perfect designs. It was almost impervious to being bitten from above and its long, strong tail muscles would have been able to swing its club with great force, however, the tail wasn't too flexible and could only swing 45 degrees in each direction.[1]

There is very little fossil material from this dinosaur - it was apparently the last and largest of the family of armored dinosaurs. It walked fairly upright on all four legs, carrying its tail off the ground and it is theorized that it would drop to the ground when attacked to use its armor as a shield to cover its legs and underbelly.[1]

During a flashback in the Cretaceous, a herd of Ankylosaurus were drinking in a swallow river.[2]

Ankylosaurus originally had 91% of its genome mapped before Hurricane Clarissa struck the island. Ankylosaurus was then successfully recreated by InGen in the Embryonics Administration lab on Isla Sorna in secret after the acquisition of InGen by Masrani Global Corporation and after the passing of the Gene Guard Act, alongside Corythosaurus, Spinosaurus, and Ceratosaurus.[3][4] The Ankylosaurs were parented and fed in captivity until InGen abandoned the lab and released them into the wild. The Ankylosaurus clones had a dark tan underbelly with bright red patches on the eyes. It also had faded stripes of purple on its body and its armor was black.[3]

The clones looked different from the original counterparts. Unlike the original, they had sharp spikes protruding from its body instead of osteoderms, a different tail club shape, and the facial horns are broader than the original.

Being bred illegally and far after the Jurassic Park Incident, it was not planned to be an attraction in Jurassic Park.[5]

Living in the wild

After being cloned and experimented on for a period of 9 months in the late '90s, the unnamed InGen personnel set the dinosaurs free alongside the other illegally bred dinosaurs. Ankylosaurs roamed freely across the island for years to come, until they were illegally shipped from Isla Sorna to become eventual attractions in Jurassic World.[6]

Being created illegally and against the knowledge of InGen or Masrani higher-ups, it is unknown if the Ankylosaurus and the other new dinosaurs were affected by or were even bred to include the lysine deficiency that affected the original dinosaurs. It is unknown how many Ankylosaurs lived on the island, but they were known to have resided in the jungles of the northeast.[3]

"You're welcome. Up close and personal with four dinosauruses!"
—Zach Mitchell to Gray Mitchell talking about the Ankylosaurus in the Gyrosphere ride.(src)

InGen eventually used Ankylosaurus for Masrani Global Corporation's new dinosaur zoo Jurassic World on Isla Nublar. These specimens had grayish skin and dark gray armor with white spikes and were 1.1 meters longer than those originally bred on Sorna. The Ankylosaurs could be viewed in the Gyrosphere attraction, as shown in Jurassic World: Camp Cretaceous. Jurassic World's clones can gallop from a threat fast and only uses its armor and club tail as a last resort when a real Ankylosaur always used its armor and tail club mainly because it couldn't really run at all and was well-protected by its body armor. These new clones have inaccurately drooping tails most of the time.

According to the DPG, a specimen of Ankylosaurus was 18 years old in 2018, so this variant may have been cloned previously since 2001 is a date before any settlement InGen has made on Isla Nublar at the hands of Masrani Global.

It is revealed that some Ankylosaurus have also survived the rampage of the Indominus rex, but are in danger once again when a volcano erupts and threatens all the dinosaurs on the island.

Some of the Ankylosaurus were captured and taken to Lockwood Manor to be sold off in auction, with one being successfully sold by Gunnar Eversol to a gentleman from Indonesia. The remaining Ankylosaurus are later freed along with the other dinosaurs by Claire and Maisie.

Ankylosaurus was seen in both basement containment facilities, with an adult individual in cage 01 and another in cage 15 of the second facility.

By 2022, the Department of Prehistoric Wildlife had reports of Ankylosaurus in Enid, Oklahoma, and California in the USA and Khanger Ghati National Park in India. 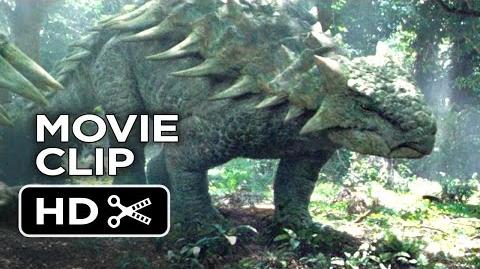 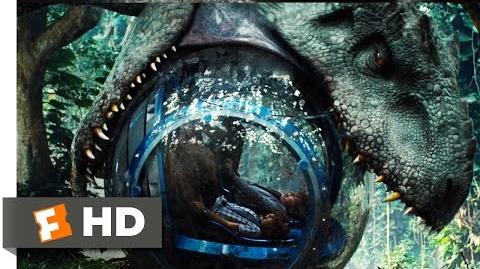 Size of the JP III Ankylosaurus 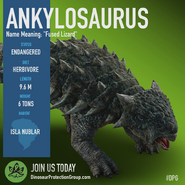 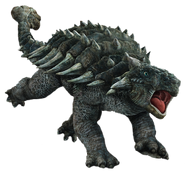 An Ankylosaurus in Enid, Oklahoma 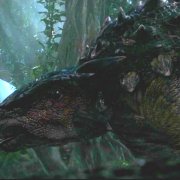 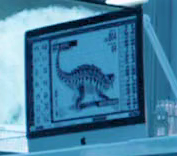 Ankylosaurus shown on a lab screen

In the script for The Lost World: Jurassic Park, Robert Burke claims to have seen the remains of an Ankylosaur herd while he was in the helicopter that transported him to Isla Sorna and Burke further claims that they have gone extinct once again.[8]

Two scenes of Ankylosaurus were removed from Jurassic Park III. This is included a battle between an individual and a pack of Velociraptor and a more peaceful scene of a herd of three crossing the river that Dr. Alan Grant and the Kirby family were on. However, the scene where an Ankylosaurus fights a Velociraptor pack was later included in the LEGO Jurassic World level "Eric Kirby".

In the storyboard for Jurassic World, the Indominus rex proceeds to eat the Ankylosaurus after she kills it, suggesting that the fight between the two was not going to be in defense nor out of the Indominus' desire to kill it for sport.[9] In Seth Engstrom's concept art of the scene, it appears that there two Ankylosaurs that were to fight the Indominus as opposed to fleeing like in the film, the two Ankylosaurus are shown in a defensive stance when seeing the I. rex approach them.[10]

Oddly enough, the silhouette representing Ankylosaurus seen on the Jurassic World website and on the Holoscape isn't based on Ankylosaurus, but on a reconstruction of the basal ankylosaurian Kunbarrasaurus ieversi (formerly referred to the genus Minmi as Minmi sp.).

According to sound designer Al Nelson in Jurassic World, the vocals for the Ankylosaurs were recorded from sea lions.