Antarctopelta was a genus of ankylosaurian dinosaur with one known species, A. oliveroi, which lived in Antarctica during the Late Cretaceous Period. It was a medium-sized ankylosaur, reaching no more than 4 meters (13 ft) in length, and showed characteristics of two different families, making more precise classification difficult. The single known fossil specimen was discovered on James Ross Island in 1986, constituting the first dinosaur remains ever discovered on Antarctica, although it is the second dinosaur from the continent to be formally named. Like other ankylosaurs, Antarctopelta oliveroi was a stocky, herbivorous quadruped protected by armor plates embedded in the skin. Although a complete skeleton has not been found, the species is estimated to have reached a maximum length of 4 meters (13 ft) from snout to tail tip. Very little of the skull is known, but all of the known skull fragments were heavily ossified for protection. One bone in particular, identified as a supraorbital, included a short spike which would have projected outwards over the eye. The leaf-shaped teeth are asymmetrical, with the majority of the denticles on the edge closest to the tip of the snout. These teeth are also proportionately large compared to those of other ankylosaurs, with the largest measuring 10 millimeters (0.4 in) across. This compares to the much larger North American Euoplocephalus, 6–7 m (20–23 ft) in body length, which had teeth averaging only 7.5 mm (0.3 in) across. 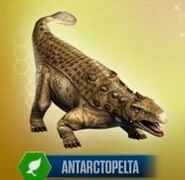 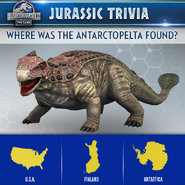 Retrieved from "https://jurassicpark.fandom.com/wiki/Antarctopelta?oldid=230081"
Community content is available under CC-BY-SA unless otherwise noted.