"It didn't eat 'em. It's killing for sport."
—Owen Grady after finding several Apatosaurus killed by the Indominus rex(src)

Apatosaurus is one of the most famous of the giant Jurassic plant-eaters. It was a sauropod, a member of a race of huge, long-necked dinosaurs. It was longer than two school buses and weighed as much as 4 adult male African elephants. For years, an Apatosaurus body stood with the head of Camarasaurus on the end of its neck. This was named Brontosaurus and was one of the most popular dinosaurs for many years. In 2015, the Brontosaurus genus was revived and several species of Apatosaurus were resigned to the Brontosaurus genus. [2]

Apatosaurus is a fairly typical member of the diplodocid family - long neck, pillar-like legs, long tapering tail and enormous size. It had, like the other family members, peg-like teeth in a head that seemed very small for such a large creature. Compared to Diplodocus, Apatosaurus has a shorter, thicker neck, and a larger, heavier body. There is much speculation about how much these creatures needed to eat and how such a small head could ingest enough food to fuel such a large body. Some scientists have stated that these huge, small-headed creatures would have needed to eat every waking moment in order to provide enough food to keep such a large body alive. Apatosaurus seemed to have every adaptation needed for continuous eating. Despite looking defenseless other than its huge size, the tail was like a giant bullwhip could probably make a loud cracking sound about 200 decibels, enough to scare or even deafen theropods such as Allosaurus.

In order to facilitate the processing of food, which it could not chew with its teeth. Apatosaurus probably swallowed stones that it kept in a gizzard similar to that found in a chicken. The tough plant fibers would spend time in the gizzard stewing and grinded up by the stones.[3]

The Apatosaurus reaches its full size in 10 years.[4]

According to information from the Dinosaur Protection Group, Apatosaurus was originally planned to be an attraction for Jurassic Park on Isla Nublar, over 57% of its genome was completed by 1993.[5] Sadly, this was put on hold after the disastrous Isla Nublar incident. Apatosaurus was eventually recreated by InGen for the Masrani Global Corporation's Jurassic World, their new dinosaur zoo.[6] Apatosaurus has gray skin with dark blue striping and dark tan on its underbelly and portions of its face. Much like the cloned Brachiosaurus, it chewed its food unlike the original Apatosaurus which only swallow their leaves and then swallow stones to grin in their guts to help the digestion.[6]

Their herds lives in the Gallimimus Valley, the Gyrosphere, and the Cretaceous Cruise, alongside Stegosaurus, Microceratus, and 100 other prehistoric species. Some of the juveniles also lived in the Gentle Giants Petting Zoo.[6]

The Apatosaurus cloned for Jurassic World were approximately 6 meters (20 feet) tall and 27.4 meters (90 feet) long, which was larger than the originals.[7]

An Indominus rex attacked six Apatosaurus during its rampage, killing five and fatally injuring one. Owen Grady and Claire Dearing found these sauropods and comforted the injured dinosaur, settling it down when it attempted to rise up, upon which it died peacefully. The death of such a harmless and docile creature caused Claire much sorrow, which was mixed with horror when they discovered the five dead ones. The discovery of these Apatosaurus made Owen realize that the Indominus was hunting for sport.[6]

It is revealed that there are surviving Apatosaurus populations on Isla Nublar, as they will now face an impending danger, alongside many other creatures, in the form of an erupting volcano.

By 2018 it was known that Apatosaurus was subject to cruelty at some point in the past, according to the DPG.[8]

By 2022, the Department of Prehistoric Wildlife had records of Apatosaurus sightings in Nogerwalk, Austria and Toronto, Canada.[9]

Later that year, a lone Apatosaurus wandered into snow-covered lumber yard, witnessed by Maisie Lockwood and some workers.

Artwork from the Jurassic Park Institute. 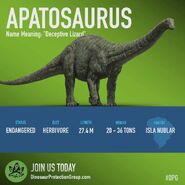 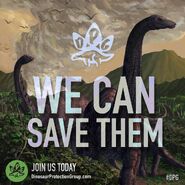 Apatosaurus and Triceratops in the Gyrosphere

Owen and an Apatosaurus

Claire and Owen tending to an injured Apatosaurus.

The wounded Apatosaurus died with Claire and Owen by its side.

The Apatosaurus herd killed in the valley by the I. rex.

Apatosaurus was originally planned to be in the first Jurassic Park, most notably in the cut river raft scene in which a carcass of the sauropod was going to be feasted upon by the Tyrannosaurus before it would give chase to Alan Grant and the Murphy kids, but this scene was cut due to budgetary reasons.[10]

In the script for Jurassic Park, Apatosaurus is listed as one of the embryos that Dennis Nedry steals in scene 49.

Apatosaurus is confirmed to be on Isla Sorna due to The Lost World Official Souvenir Magazine identifying the several skeletons spotted just outside of the Worker Village as belonging to an “Apatosaur”;

“Everywhere, the land is dotted with dinosaur skeletons. Some are huge apatosaurs, while others are smaller herbivores of many different species.” (The Lost World Souvenir Magazine, 42).

Apatosaurus appears in the Jurassic Park III Movie Storybook as the first dinosaur seen from the plane.

Apatosaurus was originally going to be one of the dinosaurs that can be created in the video game Jurassic Park: Operation Genesis, but it was cut from the final product.

The Apatosaurus skull that was seen on JurassicWorld.com does not belong to the dinosaur at all, rather it belongs to a brachiosaurid sauropod like Brachiosaurus.[1] This has since been replaced by a diplodocid femur. Furthermore, its icon on the Jurassic World website and the Holoscape is of Brachiosaurus as well.

In the storyboard for Jurassic World Apatosaurus' relative Diplodocus was originally supposed to appear before Apatosaurus was chosen.[11]

There is concept art for Jurassic World that depicts an early design of the Indominus rex attacking a green skinned Apatosaurus,[12] suggesting that there was to be a scene that showed the Indominus' attack on the sauropod herd rather than this action taking place off-screen.

The boy that hugs the small Apatosaurus in Jurassic World is played by Bryce Dallas Howard's own son.[13]