Arambourgiania is a pterosaur from the Late Cretaceous (Maastrichtian) of Jordan and the United States. It was one of the largest members of this group. The holotype, VF 1, consists of a very elongated cervical vertebra, probably the fifth. Today the middle section is missing; the original find was about 62 centimetres (24 inches) long, but had been sawed into three parts. Most of the fossil consists of an internal infilling or mould; the thin bone walls are missing on most of the surface. The find had not presented the whole vertebra; a piece was absent from its posterior end as well. Frey and Martill estimated the total length to have been 78 centimetres (31 inches), using for comparison the relative position of the smallest shaft diameter of the fifth cervical vertebra of Quetzalcoatlus. From this again the total neck length was extrapolated at about 3 metres (9.8 feet). From the relatively slender vertebra the length dimension was then selected to be compared to that of Quetzalcoatlus, estimated at 66 centimetres (26 inches) long, resulting in a ratio of 1.18. Applying that ratio to the overall size, Frey and Martill in 1998 concluded that the wingspan of Arambourgiania had been 12–13 metres (39–43 feet), compared with the 10–11 metres (33–36 feet) of Quetzalcoatlus, and that Arambourgiania was thus the largest pterosaur then known. Later estimates have been more moderate, sometimes as low as seven metres.

Arambourgiania is a Rare pterosaur in Jurassic World: Alive added in the 1.4.11 update on September 18, 2018. The coloration on its head closely resembles the reconstruction by Julio Lacerda, feutured on the website Pteros. 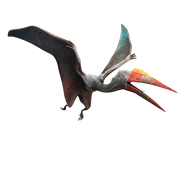 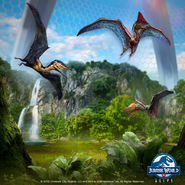 Arambourgiania was added to the game on December 15, 2021.