Archaeopteryx is considered by many to be the link between dinosaurs and birds. It had teeth and claws, but it also had feathers and wings. Archaeopteryx was first discovered in 1860 in Bavarian lithographic limestone quarries. Since that time, only five other specimens have been uncovered, with the best specimens being at the Humboldt Museum in Berlin and the British Museum.

Archaeopteryx is widely thought of as the first bird. It looked very similar to some modern birds, and several of the specimens clearly show what appear to be true feathers.

Upon closer examination, however, scientists have found some striking differences between Archeopteryx and modern birds. Archaeopteryx had a long, stiff, bony tail, unlike modern birds. Each wing had two separate fingers on the leading wing edges that were equipped with sharp, curved claws which was used to climb up into the tops of trees. The biggest differences, however, are in the skull. It didn't have a beak, but rather a true set of jaws that were equipped with many small, sharp teeth. Internally, there were also many differences in the structure of the hipbones, and Archaeopteryx didn't have a breastbone.

Scientists believe that Archaeopteryx was probably a weak flier. Its skeleton is also uncannily similar to Compsognathus, a small dinosaur that was the size of a pigeon that has been found in the same quarries.

The exact taxonomic classification of Archaeopteryx is still hotly debated. That which is shown is one of several used. Another would be: Archaeopterygiformes, Theropoda, Archaeopterygidae.[1]

Though it does not appear in any form in the game itself, Archaeopteryx is mentioned in a promotional ad for the game. 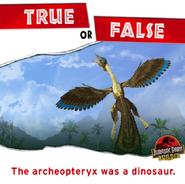 Archaeopteryx can be created from Paleo-DNA in the game.

Though it does not appear in any form in the game's story, a fossil of Archaeopteryx based on the famous Berlin specimen is seen on the main menu and the main loading screen of the game to the right of the fossil of Ardeosaurus.

Archaeopteryx seen to the right of the image.

Archaeopteryx makes an appearance as of the Update 2.9 as a rare. 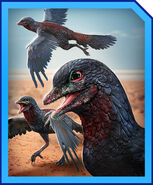 Archaeopteryx appears in the Topps comics.

Archaeopteryx was one of the animals created by InGen for Jurassic Park on Isla Nublar that went wild after the incident.

When drug lord Gabriel Cazares and his cartel bought Isla Nublar, Gabriel kept an Archaeopteryx as a pet, having it perch on his arm and feeding it small fish.[2] It is never seen again after Cazares' confrontation with Daniel Espinoza before he dropped Espinoza off into the forests of Isla Nublar and it is thus unknown if the bird survived Espinoza's and Dr. Francis White's assault on the Visitor Center. 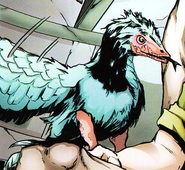 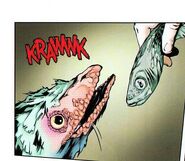 An Archaeopteryx figure also appears in the Jurassic Park Junior line. As of now it is the first and only bird figure to appear in a Jurassic Park toyline.