Archaeotherium can be created in the game but initially only in the Glacier card packs purchasable by real money. It was later released as a limited edition DNA tournament animal.

Archaeotherium is a rare Cenozoic savannah creature in Jurassic World: The Game. 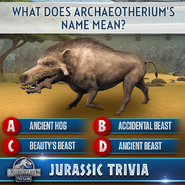 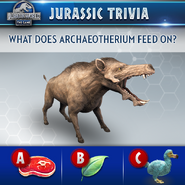 Retrieved from "https://jurassicpark.fandom.com/wiki/Archaeotherium?oldid=229253"
Community content is available under CC-BY-SA unless otherwise noted.