Archelon was a giant sea turtle from the Cretaceous period, so far the biggest of its kind. It was 4 meters (13.5 feet) long, and about 4.87 meters (16 feet) wide from flipper to flipper; 5 ft bigger than the Pacific Leatherback sea turtle.

Archelon is nr. 134 of the Carnivore Ones that can be created in Jurassic Park III: Park Builder. However, it's incorrectly listed as a Triassic animal rather than a Cretaceous animal, while in reality, it was likely more of an omnivore than a pure carnivore.

Archelon can be created in Jurassic Park: Builder as a limited edition crustaceavore, even though in reality, it likely ate jellyfish and seaweed like most sea turtles. 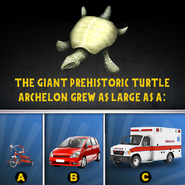 Archelon is a tournament reef in Jurassic World: The Game. Unlike the original, the Archelon in the game has a hard shell instead of a leatherback. 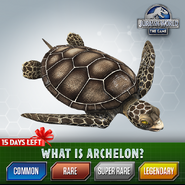 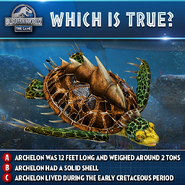 Archelon is mentioned in the database entry for the Pierre Shale, one of the dig sites for the Pteranodon.