Jurassic World: Alive
Arctops is an extinct genus of gorgonopsian therapsids known from the Late Permian of South Africa. It measured up to 2 meters (6 feet 7 inches) in length and its skull was 30 centimeters (12 inches) long. The type species is, Arctops willistoni. A second species, A. watsoni, may be synonymous with A. willistoni. A. kitchingi may be a third species of Arctops, but it was only tentatively assigned to the genus when it was first named. Both were formally synonymized with A. willistoni by Christian Kammerer in 2017.

Arctops is a rare in the game. 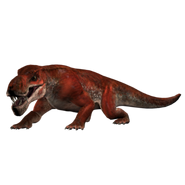 Retrieved from "https://jurassicpark.fandom.com/wiki/Arctops?oldid=254178"
Community content is available under CC-BY-SA unless otherwise noted.