Arthropleura is a large extinct millipede that lived from the Late Carbonferious-Early Permian periods. Despite its large size, it was herbivorus.

Arthropleura can be created in the Glacier Park, despite being a tropical animal. At first, it could only in the Glacier card packs purchasable by real money. Since April 22nd 2016, it became a DNA tournament limited edition. It is the first terrestrial arthropod to appear in the game. It is portrayed in-game as a carnivore when in reality, it was an herbivore. It uses the Titanoboa animation, even though they are unrelated, and share almost no anatomical similarities. 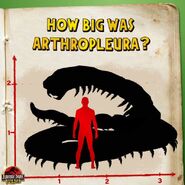 Retrieved from "https://jurassicpark.fandom.com/wiki/Arthropleura?oldid=237931"
Community content is available under CC-BY-SA unless otherwise noted.