Bio Robotic Assistance Droid (or BRAD) are a group of canine-like robots made by Mantah Corp to protect ecostasis of each artificial biome present on their secret island. They were commanded by Kash D. Langford, and eliminate any unauthorized forms (which includes dinosaurs).

BRADs are quadruped dog-like robots with white plates. They have 2 toes on each leg. Brads have two eyes that are white in its patrol/passive state, during their scanning process their eyes glow green and it beams a green light with grids to scan its environment. If faced with any threats, their turn eyes turn red. The main directive of them are to protect biome ecostasis and patrol them to maintain this objective.[1] According to their programming, unauthorized lifeforms pose a threat to the biomes ecostasis and will initiate Elimination Protocol.[2] According to this, BRADs will outright exterminate the lifeform in order to maintain the balance of the biome's ecostasis, which even includes dinosaurs that isn't authorized to be in the biomes. They have a mouth-like part that can shoot electric balls. They can also pray tranquilizer gas to control the dinosaurs. Finally, they can control and communicate with other machinery or robots. This is shown when Brooklyn hacks a BRAD to control the BRAD-X commanded to follow Darius and when a BRAD commands drones to surround and take a T-Rex named 'Big Eatie' to a test battle.

The BRADs first appear in Turning Dr. Turner, where one kills a Compy as it was an "unauthorized lifeform". However, Dr. Mae Turner stops the robot before it can get to the campers. Mae tries to summon another BRAD, but it never came. Another one that was ordered by Kash was destroyed by Kenji when it tries to attack Yaz and Ben. Another assisted Turner in spraying a tranquilizer gas to prevent Big Eatie and Little Eatie from harming each other under the effects of a drug in their frenzied state. After this. multiple BRADs were sent out to find the campers, although they weren't aware that they were the campers. During this chase, the electrified balls that BRADs shoot are proven to be rather weak, as they barely harm Velociraptors. Later, the orders of the BRADs are mainly taken over by a more advanced type of BRAD called the BRAD-X.

The BRAD-X robots were made as improved versions by Kash from the BRAD bots. They come in black and are bipedal with a saurian appearance, but do move on all fours when trying to pick up speed. They're much more durable than the original robots, even being able to recover from a giant log smashing onto its neck. The only way to destroy it is by incorrectly wiring the robot, as shown by Brooklynn, who failed to reprogram it in an episode. They were revealed when one attacks Darius in order to stop him from escaping the main facility. 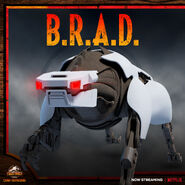 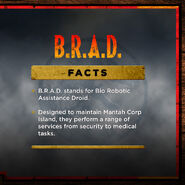