Jurassic Park: The Game
As Gerry Harding investigates the strange noise outside he observes that it is just a tropical bird. He contemplates the outcome of the dinosaur battle with his daughter and discusses a plan. They are then spotted through surveillance by Laura Sorkin, an InGen scientist stranded by the storm at a northern field lab. She has access to the park computer system and plans to send a tour vehicle to rescue Gerry and his daughter. However she must first obtain security access by entering a code and then she is able to activate the tour. When the Explorer arrives, they climb aboard and head towards the Visitor Center but Nima Cruz who has become delirious needs to rest. She can only seem to understand Spanish so Jess attempts to translate by saying "Usted necesita descanso" - "You need to rest". 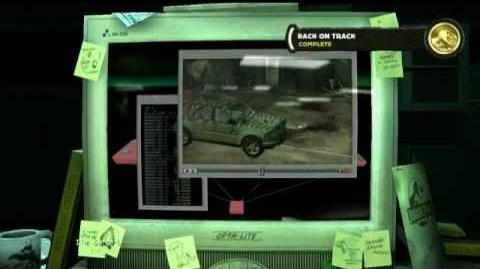 Jurassic Park The Game - Episode1 The Intruder - Back on Track
Episode1: Back on Track
Community content is available under CC-BY-SA unless otherwise noted.
Advertisement