Bajadasaurus is a genus of sauropod dinosaur from the Early Cretaceous epoch (late Berriasian to Valanginian stages) of northern Patagonia, Argentina. It was first described in 2019 based on a single specimen found in 2010 that includes a largely complete skull and parts of the neck. The only species is Bajadasaurus pronuspinax. The genus is classified as a member of the Dicraeosauridae, a group of comparatively small and short-necked sauropods that lived from the Early or Middle Jurassic to the end of the Early Cretaceous.

Bajadasaurus appears as a rare in the game. 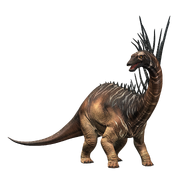 Retrieved from "https://jurassicpark.fandom.com/wiki/Bajadasaurus?oldid=254176"
Community content is available under CC-BY-SA unless otherwise noted.