The Barbasol can was a modified shaving cream can that Dennis Nedry used to smuggle dinosaur embryos from Jurassic Park on Isla Nublar. Nedry turned off the power to many enclosures to the park, including the Tyrannosaurus rex pen which John Hammond's endorsement team were parked next to. Nedry planned to get everything back on when he returned, but when Nedry crashed and was killed by a Dilophosaurus, he dropped the can. While Nedry was being attacked in the Jeep, the can was covered by mud, never to be seen again. The fate of the can is the main story arc of Jurassic Park: The Game.

In the novel, the can was used in the same manner as the film version. However, the can was of Gillette cream rather than Barbasol. It could hold fifteen embryos with tinfoil coverings. It was able to hold the embryos placed inside it for 36 hours.

The can was used to smuggle dinosaur embryos to BioSyn by Dennis Nedry. While trying to deliver it, Nedry crashed his car Jeep 12 into the Dilophosaurus pen and is attacked and killed by one of its juveniles. After dropping it, the can rolled down a small drop and landed in mud, while being covered up in more mud, becoming hidden.

The game resolves the loose end of what happened to the can after Nedry's death, after it was covered in mud. Nima Cruz and Miles Chadwick, two BioSyn employees, decide to go in after Nedry when he does not show up at the East Dock. After finding the Jeep, putting together clues of how Nedry met his doom, and recovering the Barbasol can from the mud, the pair is attacked by a pack of Dilophosaurs. They attack Miles, who is subsequently killed, while Nima grabs the can and escapes the scene. It stayed in Nima's possession until it is stolen by Billy Yoder while she is unconscious. Yoder insists on keeping it in his possession until they both leave the island. Eventually, Nima gets the can back after an unexpected turn of events, only for it to either be trampled by the Tyrannosaurus rex or left to decay on the island, depending on which ending the player chooses.

The Barbasol can appears in LEGO Jurassic World, and as depicted in the first film, it is used by Dennis Nedry to transport the stolen embryos. However, unlike the original film, Nedry survives his encounter with the Dilophosaur by stuffing a turkey leg in its mouth and flees the Jeep, though in his haste he leaves the Barbasol can in the Jeep. It is then knocked out of the Jeep as the Dilophosaur struggles with the turkey leg in it's mouth. If the player visits Jurassic Park's East Dock in Free Mode, they can find the Barbasol can buried in the ground under a glowing Black Lego rock. Using a Dilophosaurus' acid spit on the rock will uncover a patch of ground where the Barbasol can is buried. Using a character with the ability to dig (Alan Grant or any Paleontologist) to uncover LEGO pieces that can be used to build a large Barbasol can (complete with hidden embryo compartment). Doing this will earn the player a Gold Brick and the Barbasol can be broken afterwards to obtain some studs (LEGO currency). It can also be seen briefly on a shelf during the Telltale Games logo intro.

During the weeks before the opening of Jurassic World Barbasol made use of the Jurassic Park hype to advertise itself. They created the site capturethecan.com. On the site you could enter your information for a "chance to win a real Dino dig adventure vacation!"

First Prizes:
You will be automatically entered for weekly chances to win a Jurassic World Blu-Ray and Limited Edition Barbasol Collector Cans.

Barbasol also created a trailer to advertise the event. The trailer shows a Barbasol can laying on the jungle floor in the rain. The shots were not from the original film. It also showed a few scenes from the upcoming film.

The information on the site said: 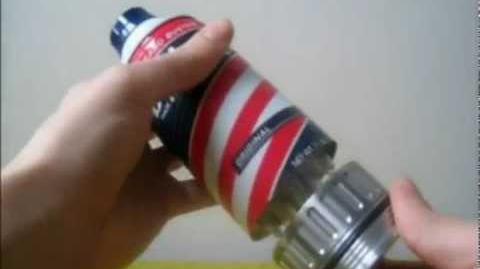 Jurassic Park Dennis Nedry's Embryo Cryocan
A collectible replica of the can
Add a photo to this gallery
Retrieved from "https://jurassicpark.fandom.com/wiki/Barbasol_can?oldid=232890"
Community content is available under CC-BY-SA unless otherwise noted.