"Something's wrong. They're communicating."
—Barry to Owen and his comrades.(src)

Barry Sembène is a colleague of Owen Grady who was once a Velociraptor trainer at Jurassic World.[1]

Somewhere in 2013, Barry was living in France. After noticing that the pack dynamic of Velociraptor was more complex than he thought, his friend Owen Grady recommended Barry to Vic Hoskins to work with the raptors.[2]

Barry was later hired afterward as the trainer and caretaker of the project's Velociraptor pack.[1]

Barry took part in stopping the Indominus rex after she had escaped her enclosure and was rampaging throughout the island. At one point in the incident, he noticed that the raptors he and Owen trained were oddly communicating. Owen also notices and realizes that the Indominus rex was also partly made of Velociraptor DNA, giving her the ability to communicate and become the new Alpha. Once the raptors turned against the humans, Barry ran to a nearby log and was attacked by Blue and was nearly killed by her until he called out her name, which she reacted, and when Owen whistled for her and she turned to chase him instead, saving Barry's life. He would later evacuate to a hangar in Costa Rica with the rest of the evacuated tourists. [3]

Barry is bilingual, knowing both French and English.[3]

Barry owned a Remington 870 fitted with a Crimson Trace Rail Master (CMR-201) laser sight, Mossberg ghost ring sights, and a Magpul MOE furniture and a 4" Smith and Wesson model 500 revolver as his sidearm. He is notably seen pulling it right before an encounter with Blue, the Velociraptor. The revolver is noted as such by its big bore and enormous cylinder, At times, the revolver is loaded with JHP rounds.

Barry was known to had a sort of friendship with Owen Grady[1] even before working together with the raptors.[2]Owen was able to converse with Barry even when the latter spoke in French, despite the former never demonstrating the same ability.[3]

Barry appears to tolerate Vic Hoskins and respect his position as head of park security(as well as the fact that he writes out his paycheck) but thought that his ideas of using raptors as weapons used in war as a foolishly stupid idea which he laughs off at initially. But once he starts seeing that Vic is actually turning his own plan into reality, Barry approaches the situation with caution.[3]

Blue is shown to viciously attack Barry as she corners him into a log. Barry draws his pistol in defense but couldn't muster up the courage to shoot Blue so instead, he calls out her name, which made her briefly stop and stare at Barry before continuing to claw the log until she gets distracted by Owen. This scene shows that Blue had some kind of relationship to Barry that almost mimics Owen, although it is clear that she doesn't respect him as much as Owen either.[3]

Barry is shown to understand Delta's behavior very well and tells Vic Hoskins that she gets hungry whenever she looks at him or he pets her. Barry and Delta may see each other in a similar way that Owen and Blue see each other.[3]

Barry has been confirmed to appear in the upcoming 2022 sequel. 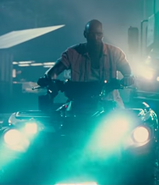 Barry yelling at Blue to stop

Barry helping out in the evacuation

When Leon is rescued by Owen, Barry says in French, "You should have let her eat him."[4]