"Baryonyx?"
"Not with that sail."
—Billy Brennan and Alan Grant attempting to identify Spinosaurus(src)

Baryonyx is an extinct genus of Spinosaur, a member of the same group as the northern African dinosaurs Spinosaurus and Suchomimus. Baryonyx was smaller than these relatives but was still a big predator. It was 10 meters (33 feet) long and 2.5 meters (8.25 feet) high at the hips. Although studies in the fossils of Baryonyx, indicate that it had not yet reached its adult stage, so it could be larger, also another study found that there were vertebrae a little larger than others, which would indicate a possible candle or hump in the adult specimen.

It had a long, narrow snout filled with teeth that were cone-shaped - a real difference from the blade-shaped teeth of typical meat-eating dinosaurs.[1]

Because of the shape of its snout and teeth (both of which are similar to those of modern crocodilians), some paleontologists think that Baryonyx ate lots of fish. Others, however, think it ate other dinosaurs. In fact, both ideas are supported by the original Baryonyx specimen from Surrey, England. In the guts of this dinosaur, paleontologists found the partially digested scales of large fish as well as the partially digested bones of a young Iguanodon. This strongly supports the idea that Baryonyx ate both fish and dinosaurs.[1]

InGen created five Baryonyx in the InGen Compound in Isla Sorna. It was planned to live in its own paddock for Phase I of Jurassic Park, but never made it to Isla Nublar.[2][3] Its paddock was located near a river, which could have supplied its residents with fish to eat.

It is unknown if there were any surviving wild populations on Isla Sorna after Hurricane Clarissa hit the island.

When Dr. Alan Grant asked Billy Brennan what kind of dinosaur they saw, Billy thought it was a Suchomimus, because of its snout, Dr. Grant said it wasn't and said bigger, Billy thought Baryonyx but he confirmed they both don't have a sail.

InGen recreated this dinosaur for Masrani Global Corporation's new dinosaur park Jurassic World. The artwork on the website had proto-feathers on the back of their arms and on the top of their heads. They were brown with yellow stripes on their backs, legs, and underbelly, a lime green eyespot and brown patches on their body and stripes on their tail. While mostly accurate, the paintings neural spines were too short. It lived alongside its relative Suchomimus in the Cretaceous Cruise.

"See?! Not a T. rex!"
"How is this better?!"
—Claire Dearing and Franklin Webb shortly before being attacked by the Baryonyx(src)

It is revealed that there are some surviving Baryonyx populations on Isla Nublar, but will now face a new danger, alongside many other creatures, in the form of an erupting volcano. By 2018, water poisoning and increased acidity caused by toxic emissions from the volcano were predicted to kill populations of aquatic creatures such as fish, endangering species such as the Baryonyx.

These variants are much different from the real-life counterparts and the Jurassic World website painting. These clones have a crocodilian-like armored back and crocodilian-like underbelly, a long but broader snout that narrows as it reaches the tip of the snout, a less pronounced notch in the upper jaw, lacks the triangular crest on the top of its nasal bones, pronated wrists like all of InGen's cloned theropods, second and third fingers being longer, claws on the second and third fingers being longer and up to the length of its thumb claw, and more straight and conical teeth. The coloration is mostly a drab grey with greyish black on the back with turquoise sprinkles all over its back, with a creamy white belly, and turquoise blue on the eye orbit.

One individual was seen walking out of a sewer tunnel, as it is about to attack Claire Dearing and Franklin Webb in the control room as lava is pouring in. Despite being pelted with lava, it remains unfazed and determined to get to its potential prey. Before it could attempt to devour them both, Claire and Franklin manage to lock it inside the underground control center, where it would have likely met its demise by the surging lava. Another individual was seen and was transported by helicopter to the boat.

At least three Baryonyx were captured to be sold off at the Lockwood Manor Auction. two Baryonyx-like theropods were briefly seen escaping the estate with all the other dinosaurs, while another one that was bought at the auction was last seen being loaded onto a cargo plane to be delivered to its buyer. It is unknown what happened with this last specimen.

A Baryonyx is sold during the Lockwood Auction.

Baryonyx appears in The Lost World: Jurassic Park video game. It lived in Habitat B of Isla Sorna together with Staurikosaurus and Dimorphodon. Here the creature is depicted as territorial and much aggressive, living in coastal caves somewhere along the island that's encountered in the Human Hunter level. If one looks closely, the head design of the Suchomimus head from Warpath: Jurassic Park resembles the Baryonyx from the game's head.

As seen in the human hunter gallery.

Ditto.
Add a photo to this gallery

Baryonyx appeared in the game, where it is depicted to have a long neck.

Baryonyx is one of the carnivores that can be recreated in Jurassic Park III: Park Builder.

Baryonyx was originally one of the dinosaurs to be created in Jurassic Park: Operation Genesis. However, the dinosaur was cut from the early stages of the game's production before a model was even created, though its name remains within the files of the game.

Baryonyx is one of the dinosaurs that can be created in Jurassic Park: Builder.

Baryonyx is a playable dinosaur in LEGO Jurassic World. It does not appear in the game's story, but the Amber Brick that unlocks it is found in the level "The Crash Site" with the Minikits (or bone boxes) for that level unlocking its skeleton skin as well. It is the only large theropod in the game that lacks a LEGO Amber destroying roar, instead of being able to smash through hard objects that is usually destroyed by dinosaurs such as Triceratops and Pachycephalosaurus. Interestingly, as it seems to based on the Spinosaurus model, the playable Baryonyx is far too big, dwarfing even Indominus rex in size. 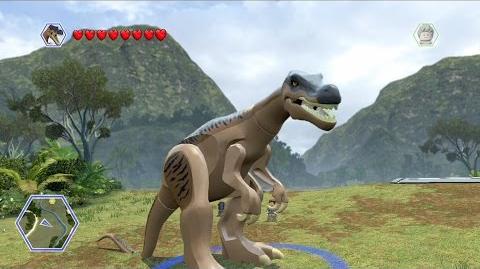 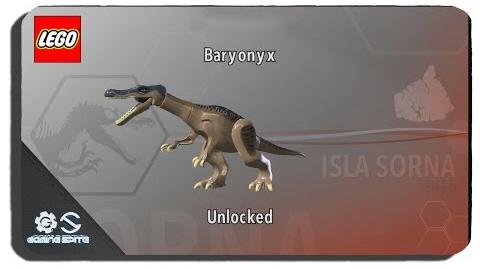 Baryonyx fact
Add a photo to this gallery

A female Baryonyx first appears when she attempts to intimidate Blue, who happens to be investigating the Baronyx's nest. However, soon after the confrontation begins a roar echoes across the landscape, and the Tyrannosaurus rex of Isla Nublar emerges, which then proceeds to intimidate the other two dinosaurs. The Baryonyx charged at the T. rex attempting to attack her, but the larger theropod simply uses her head to knock the Baryonyx over onto a large rock, causing the spinosaurid to audibly break bones, effectively killing it.

Baryonyx appears in Jurassic World: Alive, with the main GEN's appearance being based on the film version of the dinosaur.

Baryonyx appears in Jurassic World: The Game as a VIP carnivore.

A Baryonyx toy was released in the Jurassic Park Series 2 and The Lost World Series 2 toy lines. In The Lost World Series 2 it has a yellow paint job and snapping jaws. Both toys are very rare. It should be noted that The Lost World Series 2 Baryonyx was longer than the Jurassic Park Series 2 Baryonyx. However, compared to the human figures they were both too small, they could be juveniles but it seems that Kenner chose to make them smaller for an unknown reason. Two new figures of Baryonyx were released as part of the toy line for Jurassic World: Fallen Kingdom by Mattel. One was a part of the "Roarivores" line, which is a line of electronic dinosaurs with roaring sounds, and the second is a retool of the same figure for the line's slime sets.

An exclusive Baryonyx in the "Lava Surge Playset"

On the Jurassic World website, the icon for Baryonyx is reused from the Dinopedia of the removed Jurassic Park Institute website's article about the dinosaur.

It has been confirmed that the Jurassic World website Baryonyx is a paleoart painting artwork done exclusively for the website. [8]

Retrieved from "https://jurassicpark.fandom.com/wiki/Baryonyx?oldid=254525"
Community content is available under CC-BY-SA unless otherwise noted.