Basilosaurus ("king lizard") was an early prehistoric whale that lived in the Eocene period. The name is a result of the fact that when its fossils were first discovered, it was thought to be of a marine reptile. The head of Basilosaurus did not have room for a melon like modern toothed whales, and the brain was smaller in comparison, as well. They are not believed to have had the social capabilities of modern whales. Scientists were able to estimate the bite force of Basilosaurus by analyzing the scarred skull bones of another species of prehistoric whale, Dorudon, and concluded they could bite with a force of 3,600 pounds per square inch (25,000 kPa).

Analyses of the stomach contents of B. cetoides has shown that this species fed exclusively on fishes and sharks, while bite marks on the skulls of juvenile Dorudon have been matched with the dentition of B. isis, suggesting a dietary difference between the two species, similar to that found in different populations of modern killer whales. It was probably an active predator rather than a scavenger.

Basilosaurus is featured as an unlockable creature in Jurassic Park: Builder. 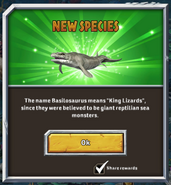 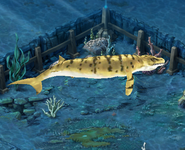 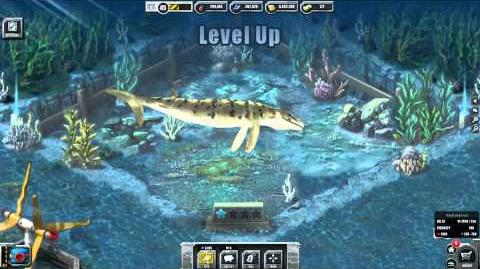