The Battle Arena allows dinosaurs from the player's park to unleash their aggressive tendencies in fights against other dinosaurs. There are 50 stages to this, with each level presenting a tougher challenge than the one before it. The player can choose up to three dinosaurs to fight in any given battle. The more health the dinosaurs have at the end, the better the reward. The newest update adds a new mechanic in which the player chooses a type of attack to use: Bite, Charge, or Swipe. Each dinosaur is weak to one of the attack types, requiring that the player discover the weakness of his opponent and utilizing that attack.

Re-fighting a battle and winning will receive the same reward, which is the same as the initial bronze medal. 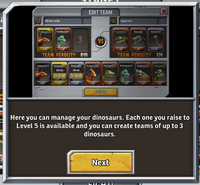 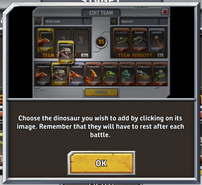 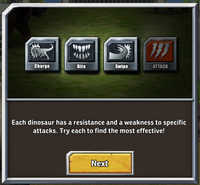 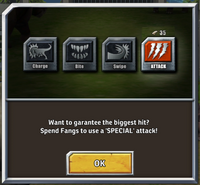 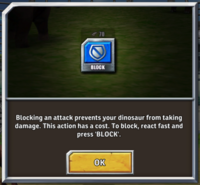 Blocking
Add a photo to this gallery

Retrieved from "https://jurassicpark.fandom.com/wiki/Battle_Arena?oldid=97063"
Community content is available under CC-BY-SA unless otherwise noted.