Ben Fitzgerald Pincus is one of the main characters in the Netflix series, Jurassic World: Camp Cretaceous. His character is voiced by Sean Giambrone.

Ben was born to his currently unknown parents and at some point his mother got a job at Masrani Global Corporation.

Ben would grow up to become a shy and bookish boy with lots of phobias and a great fear of anything he considers weird or scary, such as Whipped Cream.

In 2015, a few days before the infamous Jurassic World Incident, Ben got a free pass to the Park's Camp Cretaceous thanks to his mother's job with Masrani, which according to him, was an attempt of hers to help him conquer his fears and phobias.

During a visit to the Genetics Lab, he imprints on a newly hatched Ankylosaurus who he named Bumpy and insisted on keeping with him throughout the deadly chain of events that he witnessed and experienced on the island.

After escaping from Toro, Ben, Bumpy and the other campers get on the train that is heading to the docks for immediate evacuation off the island. Ben reveals to everyone that his mom had him come to camp to conquer his fears, and that he himself is tired of being scared.

When the Pteranodons start hitting the monorail, the other campers try to get them away but to no avail. Ben, initially just sits in a corner out of fear. However, after some time, Ben finally develops courage, and then gets on the roof and asks the group to distract the pterosaurs. He reaches into the control car and changes the course of the monorail, thus saving everyone. the others cheer for Ben for saving them. However, as Ben gets back into the main part of the monorail, a Pteranodon grabs him. Darius tries to save Ben, but is unable to, and the latter fall off, horrifying the others. He is presumed to be dead in December 2015, but in the last scene, when Bumpy finds Ben, Ben's fingers slightly move, indicating he is alive.

While the other 5 campers are hiding from Rexy the T-Rex, Yasmina says "We haven't eaten since we had those awful carob bars that Ben. However, she stops talking after saying Ben, and then everyone becomes sad.

While sleeping, Darius has a dream of seeing Ben walking in main street. He runs up to Ben and hugs him, overjoyed that he is alive. However, Ben then becomes mad and accuses him of letting him go, which frightens Darius. The dream then flashes back to Ben hanging on to Darius's hand on the train, where Ben angrily says "Let me go."

When the other 5 campers find that the Beacon is where Rexy is, a sad Kenji says he only wanted 24 hours not to think about Dinosaurs, being left behind, or Ben.

After Ben's fall, he wakes up, only to find himself abandoned and terrified of the dangers all around him, including Toro, who blocks the way back to safety. He eventually falls into a routine, mirroring Bumpy to find food and water, but eventually sends Bumpy away in a fit of rage. He regrets this decision, but it leads to him standing up for himself against a herd of Compsognathus. He becomes self-reliant and wild, fashions a spear, and then tries to hunt Toro. At this point Bumpy returns, now fully grown, and helps Ben drive Toro over a cliff, defeating it. He then goes after a distant campsite, and overhears Mitch, Tiff, and Hap discussing his friends, which alerts him to something amiss.

These events then chronologically merge with the end of "Salvation", the episode prior, where Ben sneaks up on Hap and knocks him out, saving Brooklynn and Kenji in what appears to be January 2016

Ben staunchly disagrees with Kenji that they should trust Hap, but Brooklynn decides to take him along while tied up. He goes with everyone to a storage unit, where they find a motorcycle, so everyone else piles on the motorcycle while Ben rides Bumpy out of the storage unit amidst an explosion. Ben tries to lead some of the Baryonyx trio away from his friends, but they don't follow him. He manages to meet up with them later, sans Hap, who sacrificed himself to let Kenji and Brooklynn escape.

Ben goes with the campers into the tunnels, hoping to arrive at Main Street in time to help Darius and Sammy. However, a gate blocks their path, so he follows Brooklynn deeper into the structure to eventually find a backup power facility. He's unable to help, but eventually Kenji manages to restore the power. It takes them a good deal of time, but eventually they're able to gain enough control of the island to reactivate the hologram of Tyrannosaurus Rex, which distracts the real Rex and allows Darius and Sammy to escape.

Ben gets on the speaker to admonish Darius not to be a hero, but agrees to go with Yaz to drive the dinosaurs away from the watering hole. He rides on Bumpy with Sammy and flashes lights and screams to scare the dinosaurs into a stampede, and he also recovers Yaz when her car breaks down. On Bumpy, he flees from Tyrannosaurus Rex,, who drove the dinosaurs right back in the other direction. He eventually escapes and rendezvous with Darius, and forgives him for letting him fall.

Ben is a guest sensitive and bookish boy who is not much for the outdoors. Timid, anxious, and easily startled, he suffers from a wide variety of fears (both rational and irrational) and much prefers a quieter pace. That said he is also a kind and empathetic boy, bonding with a newly hatched Ankylosaurus whom he named Bumpy and quickly becoming very fond of her. Despite his many fears and the terrors of the island, Ben grew braver and more assertive to the point where he actually stood his ground and argued with his fellow campers about Bumpy tagging along and culminated in his heroic act of getting to the driver's cab of the monorail to correct their course despite being clearly terrified during the whole experience and risking certain death to do so. Ben is also very health conscious as he eschews regular confectionary in favour of health food and has shown disdain for caffeine. He also exhibits germaphobia and (prior to meeting bumpy) zoophobia.

However, ever since his fall and abandonment by his friends, Ben has learned to adjust to the wild and toughened because of this. At first, he had trouble surviving due to his several phobias preventing him from actually accomplishing anything, along with his growing impatience of Bumpy’s daily routine of stealing Ben’s bed and preventing him sleep. He finally broke down after realizing he was on his own, causing him to send Bumpy away in a fit of rage, a mistake he realized fully after seeing Bumpy’s lack of presence. Due to this, Ben began to harden, finally letting go of his phobias and finally learned how to truly survive the jungle, later defeating Toro with the help of a now grown Bumpy.

Ever since this event transpired, Ben has abandoned his shy and weak demeanor, now possessing the behavior of a wild survivalist. He frequently refers to the other campers as kids, due to his belief they are less experienced, but is nonetheless happy to be reunited with his friends. He surprisingly holds no grudge against them for abandoning him, apparently understanding their reason for this, although whether or not there is more to this than he lets on is unknown. He was less surprised to see the group, only calmly and slightly awkwardly greeting them, but was still happy to see them.

Ben also appears to have developed a somewhat sadistic and violent streak, as he constantly suggested feeding Hap, Mitch, and Tiff to the carnivores dinosaurs and was willing to electrocute Hap out of high mistrust, showing a bit of a merciless trait as well to his enemies. 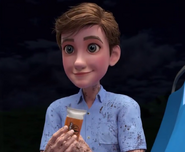 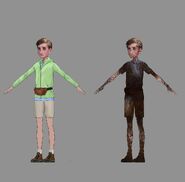 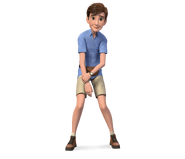