At 25[2] Billy was an associate professor in paleontology and worked as the site manager of his colleague Dr. Alan Grant.[2]

Billy traveled to Isla Sorna with Grant, the Kirby's, and their team. Brennan is portrayed as an enthusiastic young paleontologist who follows Dr. Grant to Isla Sorna, not because Grant thought that he would be informative to the Kirby's tour of Isla Sorna he was about to guide, but because he was the one who got them into their current situation and he did not want to be left alone with them.

He is shown to be very serious about his career as he was willing to take a calculated risk and put himself in danger to fund the dig site he was working at by stealing velociraptor eggs, thinking that they would be worth a fortune enough to fund his and Grant's dig site for another decade. This eventually led to Grant losing all respect for him. However, he managed to redeem himself later in Grant's eyes by rescuing Eric from the Isla Sorna Aviary.

He was believed to be dead when the Pteranodons attacked him but was later discovered to still be alive, just barely, and was later rescued by the United States Marine Corps. 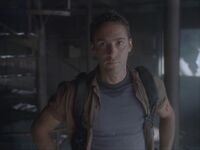 Billy Brennan will be a playable character in the video game LEGO Jurassic World. He is able to climb rocks and paraglide short distances. [3]