< Blue
View source
watch 01:55
Cobra Kai Season 4 - The Loop
Do you like this video?
Play Sound

Originally, Blue appears in Jurassic World: The Game in the mission "Rebel Rebel", but is only heard and does not make a physical appearance. But in an update, the Raptor Paddock, along with Blue, Charlie, Delta, and Echo, were added to the game for battle boosters that can help the player in certain battles. Blue is for defense, and the player gets either blocks or extra health boosters from her.

Blue will appear in LEGO Jurassic World as a playable dinosaur.

In the Main Menu, Blue can be seen driving Owen's motorcycle.

Blue first becomes playable in the level "Welcome to Jurassic World". Unlike the other raptors, she and Charlie are the only two raptors that are playable during the training course. After the course is finished, Leon, who is impatient with their hunting of the pig, accidentally falls into the enclosure of the raptors and becomes cornered by them. Owen and Barry soon intervene and both the pig and Leon escape.

In the level "Under Attack" she and her participate in the hunt for Indominus rex, but the hybrid becomes their alpha when they find her and the raptors turn on the humans. Blue is the final raptor the player(s) encounter and is found cornering the last remaining ACU trooper, which allowed the Indominus to tug at him. With the combined efforts of Barry and Owen, she is pushed out of the area by a HumVee charged by Barry's rifle. She and her pack later attacks the Medical Vehicle being used by Claire but are stopped by Gray, Zach, and Barry.

In the final Jurassic World level "Main Street Showdown". When Zach goes down the dark hallway to turn on the Jimmy Fallon hologram to distract Charlie, Blue pounces on Zach, though he fights her off. She, Charlie, and Echo then become distracted by a hologram of a turkey in the Innovation Center also set up by the humans so they could escape the raptors. But after they go outside the Velociraptors corner follow as well and surround them. While surrounded, Owen manages to rekindle his bound with Blue and her pack just before the Indominus rex arrives in Main Street. During the fight, Blue stays back to assist the humans rather than fight the I. rex head on. After the battle, she and her sisters decide to follow the Tyrannosaurus rex that participated in the fight as their alpha. 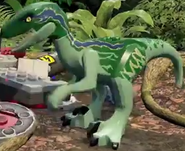 "Okay. Let's make a deal. You don't eat me, and I won't get stuck in your throat when you inevitably do."
—Owen Grady upon mounting Blue(src)

Blue will be playable in the upcoming game LEGO Dimensions. Blue is not called by her name in the game, only simply being referred to as "Velociraptor". She can only be acquired by purchasing the team pack for Jurassic World, which was released the same day as the game.

Unlike most depictions, she can be ridden by humanoid characters. There is a total of three ways to build Blue's figure with each representing a different form in-game. The first is the basic raptor configuration, the second is called "Venom Raptor" which gives her a Dilophosaurus frill and venom, and finally the "Spike Attack Raptor" that gives her a Parasaurolophus like crest and the ability to charge like a Pachycephalosaurus. 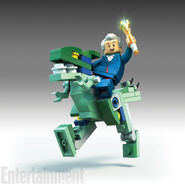 Blue with the Wicked Witch of the West.

Blue with Owen, and Legolas in Middle-earth.

Blue and Owen with Scooby-Doo.

Blue and Owen with Batman, Gandalf and Wyldstyle.

Shaggy getting scared of Blue.

Blue appears as an unlockable dinosaur in the newest Jurassic World app that ties to the Mattel toy line. She looks near identical to her movie appearance, but lacks her distinct white striping. In Jurassic World Facts, there is three forms of Blue to be unlocked by scanning the QR code on the bottom of her figures' feet. The player, like with every dinosaur in the game, can light a flare to see her face when she's locked.

Blue, as she looks once unlocked or as "Dinosaur of the Week"

Blue as she looks when locked

Blue is present in Dave and Buster's exclusive Jurassic World: Fallen Kingdom-themed VR experience titled Jurassic World VR Expedition, along with the multiple other dinosaurs that appear in the fifth installment of the franchise.

Blue is a Cunning Epic creature in Jurassic World: Alive. 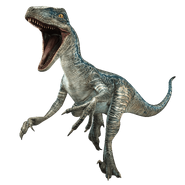 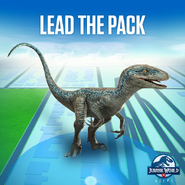 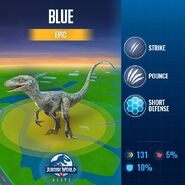 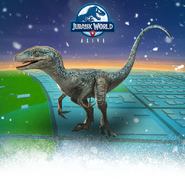 Blue appears as a skin option for the Velociraptors in a small skin pack in the game.