Bonitasaura is a titanosaurian dinosaur hailing from uppermost layers of the Late Cretaceous Bajo de la Carpa Formation, Neuquen Group, located in Río Negro Province, Northwestern Patagonia, Argentina. The remains, consisting of a partial sub-adult skeleton jumbled in a small area of fluvial sandstone, including lower jaw with teeth, partial vertebrae series and limb bones, were described by Apesteguía in a short communication in mid-2004.

The genus name Bonitasaura refers to the fossil quarry’s name, “La Bonita”, while the name of the type species, B. salgadoi, pays homage to Leonardo Salgado, a renowned Argentine paleontologist.

Bonitasaura can be created in Jurassic World: The Game as a common herbivore.

It is usually first obtained with one of the Mystery Packs. 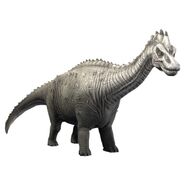 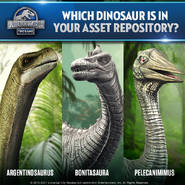 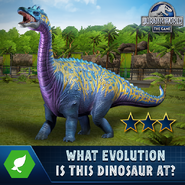