Head of the army in charge of reorganizing Jurassic Park; General West was highly unimpressed by both Drs. Alan Grant and Ellie Sattler. He relied mostly on his consultant, Dr. Jeremiah Fischer. General West appears solely in the Jurassic Park comics. He is featured in the series Jurassic Park: Raptor, but makes infrequent appearances in the Return to Jurassic Park series as well. 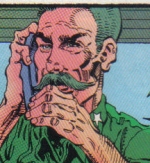 Add a photo to this gallery
Retrieved from "https://jurassicpark.fandom.com/wiki/Bradford_West?oldid=124230"
Community content is available under CC-BY-SA unless otherwise noted.