"Hey! Those are Brontosauruses."
—Tim Murphy misidentifying the Brachiosaurus for Brontosaurus.(src)

Though no living animals of this species make an appearance in the film, Brontosaurus is briefly mentioned by Tim Murphy, who misidentifies Jurassic Park's Brachiosaurus as Brontosaurus.[1]

Though no living animals of this species make an appearance in the film, Brontosaurus is mentioned on a sign depicting the map of Gyrosphere Valley.

In Season 1, Kenji misidentified a sauropod for a Brontosaurus, with Darius explaining the park does not have this dinosaur.

At the time of the major events in the novel canon, Brontosaurus was still a synonym of Apatosaurus and was just used as a nick name for said sauropod.[2][3]

Brontosaurus can be created in Jurassic Park: Builder though it requires dino-dollars purchase. Its appearance in the game is odd because when the game was made Brontosaurus was synonymous with Apatosaurus.

Fully Maxed Brontosaurus in a fight

Inaccurate Apatosaurus synonym evolution fact, which was accurate until 2015. 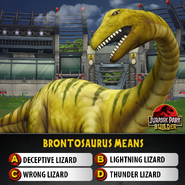