Brooklynn is a main character in the Netflix series, Jurassic World: Camp Cretaceous. Her character is voiced by Jenna Ortega. Brooklynn is also known as "Superstar" by Darius.

At some point in 2015, Brooklynn acquired VIP tickets to Camp Cretaceous, an adventure camp on the Northern end of Isla Nublar that was not yet open to the general public. She had acquired the spot by being a famous social media personality.

She is focused on getting content for her social media, usually interviewing other kids. When she notices Sammy taking cell samples from a Sinoceratops in one of her videos, she notices her phone missing from her charger. The next day, she is constantly asking the campers where her phone went, trying to get Sammy to admit what she had done. When the Indominus rex escapes, she, along with the gang escape into the jungle after falling from the zipline ride.

They trek on towards the Research Lab, and find Eddie, a scientist who had gone so crazy from fear he had attempted to escape the island, and the kids, by driving off in his van. The Indominus rex charges the van off the road and devours the poor man, as the gang escape in the abandoned vehicle. Brooklynn's phone falls out of Sammy's pocket, as she reveals she is a spy from Mantah Corp. Yaz quickly turns her body, causing their van to crash. The campers leave the crashed van and go on the kayak ride, which sends them down an offshoot pipe and into the Mosasaurus Lagoon.

Brooklynn and Kenji, aboard the CKK (Cool Kids Kayak), escape the hungry Mosasaurus. Brooklynn and the other campers attempt to ride the monorail, before being stopped by Toro. The group sneak around the dinosaur carefully and begin to crawl up the steps, and out of sight. When one camper accidentally kicks and empty coffee cup, Brooklynn scrambles to quietly stop the trash from making noise. She attempts to grab the cup, but only hits it further alerting the hungry Carnotaurus. She, among the others, make it up the steps and into the monorail train, away from danger.

Brooklynn and the others take a few toasts in their spare time before they notice a flock of agitated Pteranodons swarming them, because of the light and speed for the vehicle. Her and the others knock out the lights and attempt to exit the train before it speeds into a downed monorail train. They all jump, somehow surviving the harsh landing, and scattered from Bumpy, and what they presume the body of Ben.

They take the underground tunnels to find the East Docks, confused by the now blocked passages, they are lost. Brooklynn finds a taser prod in a locker and gives it to Yaz as a walking stick. They hide from Toro, who appears to torment the group once more. They are cornered in a sealed-off loading bay and decide to blow up Toro via a crate full of compressed air, hand sanitizer, and the taser prod.

The initial attempt fails and sends Brooklynn and the campers into hiding. When Yaz throws her taser prod into another pile of compressed air, they explode and cause the dinosaur to be fatally burnt. The dinosaur limping away, and a hole blown open, they are finally at the docks. Except for the fact they had missed the last evacuation departure. The last shot of Brooklyn and the gang have them aimlessly wandering Nublar, in search of a place to try and survive.

Brooklynn and Sammy Gutierrez help carry Yasmina Fadoula while fleeing from dinosaurs, eventually arriving at Main Street. There, Brooklynn finds a camera which she uses to record for her followers, goofing off the first day of the search for communication devices. The next day, everyone locates a distress beacon in a T-Rex lair, so Darius Bowman and Kenji Kon invade the lair while the T-Rex is gone. However, as the T-Rex returns, Brooklynn uses a cutout of herself and a walkie talkie to distract the T-Rex, allowing Darius to activate the beacon.

Brooklynn is beset by odd noises that no one else seems to hear. She eventually goes with Darius and Sammy to procure medical supplies, and once again hears a strange noise while they begin arguing, preventing her from having any serious input. Eventually she follows her ear to find another Baryonyx, who chases her back to the medical station. She screams for the others to run, and is cornered with Darius atop a cage. Sammy releases other dinosaurs to distract the carnivorous Baryonyxes to allow everyone to flee back to camp, their new base. There, she once again discovers something strange: a grove of flowers that are frozen in the center.

Still insistent that everyone goes after the flowers again, Brooklynn convinces Sammy and Yasmina to accompany her, although she cannot relate to their high school experiences as they search. They eventually find the flowers and a vent underneath, signifying electricity and air conditioning, so they keep searching, this time with a more common topic to talk about. They eventually find a genetics lab, and a manilla folder labelled E750. They're forced to leave due to a Baryonyx group, but luckily Sammy recovered the folder for Brooklynn.

After the campers are saved by Hap, Mitch, and Tiff, Brooklynn tries to talk to Hap, but he harshly rebukes her and nearly steals her keycard. She becomes suspicious of him, and tries to break into his yurt, but this causes and alarm to go off and nearly results in a fight. Darius tries to make her stand down, but she refuses, and accidentally offends him, so Darius, Yaz, and Sammy leave her to go watch dinosaurs with Mitch and Tiff. Brooklynn again tries to break into Hap's yurt, but is caught and detained. She then pretends to sleep, and runs away with Kenji once Hap is distracted. Hap gives chase, and corners them, but ends up knocked out by Ben Pincus, shocking Brooklynn.

Brooklynn decides to test Hap's story that he is trying to help them, and that a boat is at the harbor, but insists he remain tied up. She leads everyone to the storage unit that he indicated, and uses her keycard to get inside just before a Baryonyx trio can get them. There, she finds a motorcycle and drives it out beside Bumpy in the midst of an explosion to distract the Baryonyx. She tries to shake the Baryonyx, and Ben even tries to draw some away, but she can't make much distance between them. At Hap's prompting, they untie him and he defends against the dinosaurs, but quickly realizes that they cannot escape, so he jumps off the bike and sacrifices himself to stall the Baryonyx trio long enough for Brooklynn to escape.

Everyone goes into the tunnels to try to reach Main Street in time to help Darius, but at a gate that blocks their path, Brooklynn hears the strange sound again and finds a strange door. Using her keycard, she opens it and leads everyone down to eventually discover a control room. Kenji restores the power, and after some time, Brooklynn and everyone else manage to master the controls enough to reactivate a hologram of T-Rex which distracts the real Rex long enough for Darius and Sammy to escape. Brooklynn then contacts them through the speakers, and learns that the hunters are going to the watering hole.

Brooklynn is sent by Darius to monitor the island and inform the campers of where everyone is, acting as eyes. She also reactivates the electric fence and fries Tiff. When Darius asks how he can get ahead of the hunters, she supplies the information easily and then asks his plan; however, he has no plan, and just wants to be a hero. Brooklynn won't accept this, gets a Gyrosphere, then runs over the hunters. She gets out and starts berating Darius, and the hunters get up, but she was actually just stalling them so that the other campers could drive the dinosaurs away from the watering hole. While the hunters watch, stupefied, Darius and Brooklynn pile into the Gyrosphere and flee, only for Darius to crash the sphere. The hunters catch up, but soon flee as a stampede of dinosaurs close in, which slams into the Gyrosphere and sends it flying. Eventually the sphere reactivates and they speed away to the docks, but Tiff makes it there first and sails away.

Brooklynn and Darius go back to the island and reunite with the other campers, joining in a group hug.

Brooklynn is very obsessed with her phone, the internet, and technology. She is constantly taking videos and photos. Hate comments on her content visibly makes her upset. She however is able to bond with Darrius to an extent after the two were saved from a quicksand pit due to the both of them wanting people to like them. Despite her anger towards Sammy for stealing her phone, she would forgive her after she realized that Sammy just did what she did to help her family while she herself just wanted to impress angry people on internet. Other than her phone addiction, she is a generally friendly and slightly rebellious person but has a bad habit of unnecessarily snooping around and getting her nose into other people’s businesses.

Due to traveling around the world and being tutored online, Brooklyn has never been a regular teenager before, and as such is awkward when placed in a regular conversation regarding other teenagers. She is also not very knowledgeable about school buildings, having never been in one before.

During season 2, Brooklyn grows to be more fearless and is shown to be very reasonable with a high moral compass, as shown from when she defended Hap from Ben and later began to accept his help in getting them off the island, despite not trusting him at all. According to Hap, she has more sense than Kenji and Ben combined, which seems to be true as seen from the smart decisions she made when regarding Hap’s loyalty.

Brooklynn has bright pink dyed hair with two long bangs on both sides, and a small pony tail in the back. She wears a pink jacket with a red shirt underneath (the jacket remains fully zipped up during through the show) The jacket has black and white on the collar, on the sleeves and the bottom of the sweater. Dark blue jeans with several small tears and white shoes. By season two her lack of access to hair dye causes her hair to begin reverting back to its natural brown colour. She also has neon green eyes. Including she wears a black band on her right wrist.

Brooklyn is known for her highly successful social media presence. Her screen name is BrooklynnUnboxesTheWorld, which carries about 27 million followers. Fans of her call themselves 'Brooklanders', a name which has come to stick with her. According to her, she made the name up when she was 11 and has since disliked it. 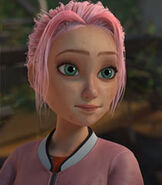 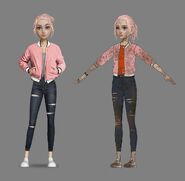 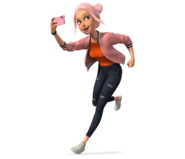