At first, Gerry wants to go back down to rescue them, but Nima convinces him that they have lasted this long and can fend for themselves. Eventually, Gerry reluctantly agrees. Nima then explains to Gerry that Isla Nublar was her former home, and that her people have dwelt on the island for generations. Suddenly, they are interrupted by the sound of a Dilophosaurus, and flee for cover. They then discover that the sound was simply a tour vehicle mimicking the call of a Whooping Swan and explaining that birds and dinosaurs produced very similar vocalizations. The vehicle's next stop is the marine facility, so they climb aboard and arrive at the facility. 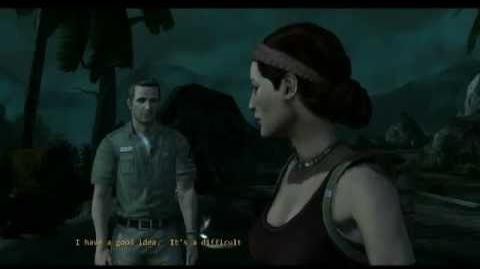 Jurassic Park The Game - Episode4 The Survivors - Bygones
Episode 4: Bygones
Add a photo to this gallery
Retrieved from "https://jurassicpark.fandom.com/wiki/Bygones?oldid=136203"
Community content is available under CC-BY-SA unless otherwise noted.