Cameroceras ("chambered horn") was a genus of cephalopod that lived during the Ordovician period. The shell of the giant Cameroceras had a total length estimated at 6 meters. They likely stalked and ambushed their prey or lied in wait, depending on how large they were.

Cameroceras appeared in the spin-off video game Jurassic Park 2: The Chaos Continues for Game Boy. It is referred to as "Cephalosaure". 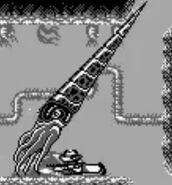 Maxed Orthocone
Add a photo to this gallery

Retrieved from "https://jurassicpark.fandom.com/wiki/Cameroceras?oldid=209034"
Community content is available under CC-BY-SA unless otherwise noted.