Jurassic World: Alive
Jurassic World: The Game
Carbonemys was a genus of giant South American turtle that lived in Paleocene Colombia. It was discovered at a coal mine, hence its name, and is believed to be one of the largest turtles known. It is believed to have used its powerful jaws to prey on crocodilians. It would have lived alongside the large snake Titanoboa.

Carbonemys is an obtainable creature in Jurassic World: Alive. The game has Carbonemys look like a tortoise when, in reality, it was a freshwater turtle. 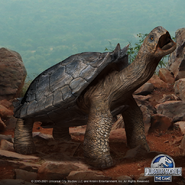