Carcharodontosaurus was a genus in the Carcharodontosauridae family. It was a large carnivore that lived in Northern Africa in the Late Cretaceous Period, the same time and place as Spinosaurus. It was among the largest predatory dinosaurs (13.3 meters long), slightly longer than the Tyrannosaurus rex.

In the game Jurassic Park: Explorer the following information is given about this creature:

Native to Northern Africa, Carcharodontosaurus had an enormous jaw with long serrated teeth that were up to 8 inches long. Its long muscular legs might have allowed it to run at speeds of up to 20 miles/hour.

Carcharodontosaurus is available in Jurassic Park: Operation Genesis as a four-star large carnivore, albeit misspelled as "Carcharadontosaurus". They prefer open areas with water. Their coloration is a primary black coating while the underparts are grayish white, while their crests are a bright red. When hunting faster prey, it is known to wait in thick vegetation and attack in the form of ambushing prey. According to JP:OG it lives on Isla Sorna. In this game, it gets along well with its fellow four-star carcharodontosaurian close relative, Acrocanthosaurus. Other coincidences are also that the Acrocanthosaurus was once classified as an allosaurid, which are also close relatives to the Carcharodontosaurus which up to date is now classified as a super member of the family. In JP: OG it looks like a Giganotosaurus, but only because they are related.

An example screenshot of both Carcharo and Acro coexisting with one another. 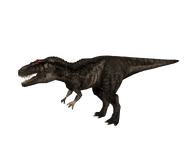 Carcharodontosaurus is one of the available dinosaurs on the iOS and Android application, Jurassic Park: Builder. 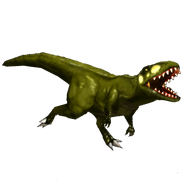 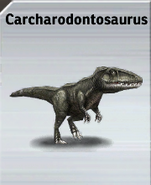 Carcharodontosaurus can be unlocked in Jurassic World Evolution, added in the Cretaceous dinosaur pack DLC released on December 13, 2018.

Carcharodontosaurus is set to appear in the 2021 toy-line titled "Dino Escape" as part of the "Mega Destroyer" assortment. This would be the first time it appear in any Jurassic Park toy set.[1]

In Warpath: Jurassic Park, designer Erik R. Kraber gave the Carcharodontosaurus sounds that consisted of animals that were physically built and powerful such as growls and howls of a Bengal tiger.[citation needed]

In Jurassic Park: Operation Genesis the roars of Carcharodontosaurus were more in lines of territorial sounds, which were made of pitched-down stock sound effects from aggressive African elephants, and its hiss was made from sounds of crocodilians.[citation needed]

In Jurassic World Evolution, the sounds of the Carcharodontosaurus were made from tigers, lions, elephants, and presumably inactive mechanical objects, judging one of its vocals.[citation needed] In its sequel, Jurassic World Evolution 2, its roars from the previous game were merged with various roars recycled from Jurassic Park: Operation Genesis.