"Your arms are... pretty much vestigial at this point! Ha!"
—Darius Bowman(src)

Carnotaurus ("meat-eating bull"), was one of the most bizarre yet dangerous meat-eating dinosaurs ever found. Its skull was short, with spiked armor in the form of feature scales across its body (skin impressions show this, although it is unknown around the face since the impressions for that area were destroyed) on the top and a pair of knobby horns over its small eyes. The neck and shoulder blades were well developed, but the arms were incredibly short, with forearms so shrunken they were practically just wrists; not even Tyrannosaurus rex had such small arms.[1]

With its small skull and weak bite force, Carnotaurus might not have been able to attack big plant-eaters, but it was probably fast due to its long and powerfully built legs and could have easily chased down smaller, agile prey.[1] In fact, research has indicated that despite Carnotaurus’ small head, its jaws were able to open very widely apart from other theropod dinosaurs in order to catch prey.

The horns of Carnotaurus look something like those of a bull - and like a bull, it may have used them in contests with others of its own species. In this way, two Carnotaurus could test each other's strength without either of them seriously injuring the other.[1]

Carnotaurus has become quite famous as a result of its starring role in the Disney animated film Dinosaur, however the animal depicted in the film are closer in size to Tyrannosaurus rex than the actual real Carnotaurus.

Two Carnotaurus were recreated for the original Jurassic Park, but they were never transferred to Isla Nublar. It is unknown what happened to them after Hurricane Clarissa struck the Isla Sorna.

In 2009 Carnotaurus became one of the dinosaurs exhibited as an attraction in Jurassic World. However, the exact attraction in which it was included is unknown, as the dinosaur was not mentioned in any of the advertising brochures for the park. At least one Carnotaurus named Toro ultimately proved to be too aggressive, which is why he was housed in a paddock away from the visitors.

Genetic material of Carnotaurus was, in 2014, used in the creation of the genetic hybrid Indominus rex.[2]

While Jurassic World was still open, Darius and Kenji snuck into Toro's paddock so as to avoid their punishment of cleaning the dinosaur dung they were required to do so after their counselors Dave and Roxie ordered them for entering the Raptor Paddock with Brooklynn unsupervised. While realizing that they were inside the paddock, Toro chases them and the two barely escape via a feeding container, in which Toro gains the scar on its snout.[3] Later, the Indominus rex breaks Toro free from its paddock, allowing the Carnotaurus to roam free.[4]

Later, the campers run into Toro when they were getting on a Monorail, resulting in a hide and seek game temporarily, and then Toro chased them up the stairs until the platforms holding the stairs collapsed.[5] The campers then confront Toro again in the tunnels and chases them, with the campers temporarily escaping into a large room where they attempt to light up crates and explosives to defeat Toro, and succeed in one large explosion destroying the wall blocking them and injuring Toro. Wounded and exhausted, the Carnotaurus withdrew from the pursuit, leaving the campers and the tunnels.[6]

Some time later, Toro tried to hunt Ben and Bumpy, as they were separated from the other campers at the time. As the episode progresses where Ben gains courage, he battles Toro with Bumpy, now a sub-adult, coming in recently, and they send the Carnotaurus falling down a cliff.[7] While Toro wasn't killed by the fall, the Carnotaurus was gravely injured.

It is revealed that there are surviving Carnotaurus populations remaining on Isla Nublar, but will now face an impending danger, alongside many other creatures, in the form of an erupting volcano.[8]

These clones looked a bit different from their real-life counterparts. They were slightly oversized, being 10.4 meters (34.10 feet) instead of 9 meters (30 feet) when fully grown, had pronated wrists like all of InGen’s cloned theropods, has a shrink-wrapped face, had spikes rather than rounded osteoderms, lacks lips covering its teeth, has larger arms than in life with actual elbows, claws on all four fingers rather than just three of the four of the originals, and the speed was reduced. There seem to be two variations of the Carnotaurus: the first variations' coloration is a subdued red with several black marks across its entire body. The other variation is mainly black with reddish-pink marks going from the face and across the back.[8] It is unclear if these different variants are a result of them being different genders, or if they are a result of them being different clones.

At least two Carnotaurus were captured by Eli Mills and brought to the Lockwood Manor and were freed along with the other dinosaurs by Maisie Lockwood. One of the Carnotaurus, who has a broken horn and scars on its face, joins the Tyrannosaurus rex of Isla Nublar in tearing apart and eating Eli Mills as he attempts to flee the manor with the Indominus rex DNA sample that is eventually smashed underfoot during the attack. The Tyrannosaurus then knocks over the Carnotaurus with her head and the Carnotaurus gets up and runs off.[8] It is a popular fan theory that this "Carnotaurus" is Toro due to its many scars, black skin with dark red marks across its body, and it's stunted/broken horn.

The remaining Carnotaurus now roam the wild areas of the United States of America.

Carnotaurus and Allosaurus were shown attacking the city by terrorizing the Malta citizens. 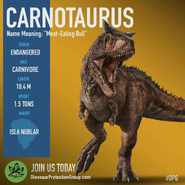 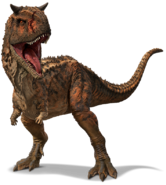 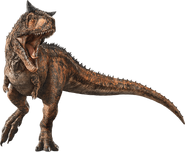 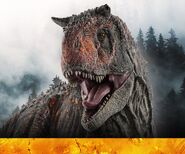