Carnotaurus is an unlockable dinosaur in Jurassic World: Evolution added in the Fallen Kingdom DLC.

Carnotaurus fossils are unlocked once the player reaches a high enough rating with the Science Division on Isla Pena.

Cabot Finch: "This carnivore, the Carnotaurus, was first discovered in Argentina. The name means 'meat-eating bull'... as if a regular bull wasn't bad enough."

"Carnotaurus is a lightly built, bipedal predator and is well adapted for chasing prey." ​​​""

Carnotaurus is a medium sized therapod that eats large amounts of meat from any source.

They are normally solitary, but can co-exist in pairs, and alongside a modest number of dinosaurs from other species.

Their territories should comprise of good sized grassland with a small area of forest cover.

Carnotaurus was a large therapod dinosaur. Its name means "meat eating bull", referring to the bull-like horns above its eyes. Rival Carnotaurus are likely to have combated each other with rapid head blows, ramming each other and using the horns to absorb the shock.

This ligtly built, bipedal predator was well adapted for running, and could have been one of the fastest therapods, well-suited to for hunting small prey dinosaurs. Its forelimbs were shorter than any other other large carniverous dinosaur, suggesting they were completely vestigial.

Carnotaurus is known from a single well-preserved skeleton, found in 1984 in the La Colonia Formation in Argentina. The find included unusual details such as the hyoid bones that support the tongue in the jaw, and extensive skin impressions showing small non-overlapping scales.

Carnotaurus would have lived in a seasonal environment with dry and humid periods. The La Colonia Formation represents the deposits of estuaries, tidal flats and coastal plains. 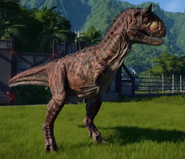