Of the beaver family

Castoroides is an extinct genus of enormous beavers that lived in North America during the Pleistocene. C. leiseyorum and its northern sister species Castoroides ohioensis, were the largest beavers to ever exist.

Castoroides were much larger than modern beavers. Their average length was approximately 1.9 m (6.2 ft), and they could grow as large as 2.2 m (7.2 ft). The weight of the giant beaver could vary from 90 kg (198 lb) – 125 kg (276 lb). This makes it the largest known rodent in North America during the Pleistocene and the largest known beaver.

Castoroides can be created in the Glacial Park of Jurassic Park: Builder. It was at first only purchasable in real-world money. Since June 24th 2016, it was meant to become a DNA tournament limited edition. However, due to the tournament resetting, it didn't appear. However, it will be a DNA tournament for it starting July 8th, 2016.[1] 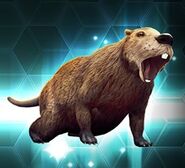 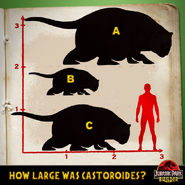 Retrieved from "https://jurassicpark.fandom.com/wiki/Castoroides?oldid=233423"
Community content is available under CC-BY-SA unless otherwise noted.