Ceratosaurus was a medium sized carnivore that lived at the same time as the larger Allosaurus, in the Late Jurassic period. However, it also lived some millions of years before the emergence of the successful allosauroids, being of the more primitive four fingered Ceratosauria. What makes it different and distinctive is the large horn on top of its nose and the two horns over its eyes. The use of it has been debated and is most likely used for display, a weapon, or a special used for courtship battles. About 100 years ago, when it was first discovered, it was one of the most well-known dinosaurs. Another unusual feature is that Ceratosaurus had four fingers on its hands, instead of the more common three among the other large meat-eaters. This is typically an indication that this theropod is relatively primitive, whose ancestral relatives are from the earlier times of the Mid Triassic to Mid Jurassic periods when coelophysoideans and ceratosaurians were much more prevalent. Allosaurids and megalosaurian carnosaurs, both kinds tetanurans, were much more advanced, with greater speed and intelligence, as well as the ability in at least allosaurids to form packs.

It is probable that the Ceratosaurus ended up being sidelined by the Allosaurus in North America, as evidenced by the fact that Ceratosaurus is the rarest fossil theropod genus present in the magnificent Cleveland Lloyd Dinosaur Quarry. It probably became a prowler of the forest, using its terrifying dentition when ambushing smaller Dinosaurs.

This information is given about Ceratosaurus in Jurassic Park: Explorer:

Ceratosaurus was successfully recreated by InGen in the Embryonics Administration lab on Isla Sorna in secret after the acquisition of InGen by Masrani Global Corporation and after the passing of the Gene Guard Act, alongside Corythosaurus, Spinosaurus, and Ankylosaurus.[2][3] The only known Ceratosaurus was parented and fed in captivity until InGen abandoned the lab and released it into the wild.

Like all of InGen's cloned theropods, Ceratosaurus had pronated wrists. The clones had a bright red head and a white body with black striping. The only known individual seen also had small horns over the eyes like a Ceratosaurus juvenile and was quite a bit larger than the original, with it was 3 meters in height rather than 2 meters and 9.2 meters in length rather than 8.5 meters.[4][1]

Being bred illegally and long after the Isla Nublar Incident, it was not planned be an attraction in Jurassic Park.[5]

After being cloned and experimented on for a period of 9 months in the late 90's, the unnamed InGen personnel set the dinosaur free alongside the other illegally bred dinosaurs.

Being created illegally and against the knowledge of InGen or Masrani higher ups, it is unknown if the Ceratosaurus and the other new dinosaurs were affected by or were even bred to include the lysine deficiency that affected the original dinosaurs. It is also unknown how many Ceratosaurus lived on the island, but the one known specimen was known to live in the northern portion of the island.[2]

A Ceratosaurus encountered Dr. Alan Grant and the Kirby family on a riverbank when they were digging through Spinosaurus dung. At first, the humans thought it would attack them, but instead it went away, having been deterred by the Spinosaurus dung that was on them. [2]

By the year 2018, Ceratosaurus had apparently was subjected to cruelty sometime before 2018 although it is unknown if there are any surviving populations remaining.according to the Dinosaur Protection Group, Ceratosaurus is one of the 12 dinosaur species extinct by the setting of the film.</ref>

Jurassic Park Institute Artwork
Add a photo to this gallery

Ceratosaurus can be created in Jurassic Park III: Park Builder.

Ceratosaurus from Jurassic Park III: Park Builder.
Add a photo to this gallery

Ceratosaurus is available as a two-star, small carnivore in the game Jurassic Park: Operation Genesis. Its appearance is based on the movie. However, Ceratosaurus‘ upper jaw is actually smaller than the movie's design.

Ceratosaurus hunts larger herbivores in packs or even by itself for that matter. It is known to posses cannibalism when no other food is around. Ceratosaurus can coexist with the Albertosaurus, Dilophosaurus[citation needed] and Allosaurus (though they do fear it and flee when it is near[citation needed]) and even with smaller carnivores like Velociraptor, but this only occurs when they are not hungry or attacking each other. However with the smaller carnivores like Velociraptor the Ceratosaurus coexists either way and can even share its meals among the smaller theropods. 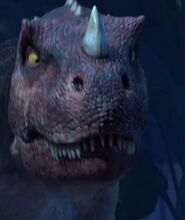 Ceratosaurus is featured in the DVD game Jurassic Park: Explorer. A player earns a dinosaur when he/she wins a minigame, when the earned dinosaur is a Ceratosaurus this video will be shown. It is stated that Ceratosaurus was a cousin to Allosaurus, when actually both dinosaurs are distantly related.

Ceratosaurus is one of the available dinosaurs in the IOS application, Jurassic Park: Builder. It has the small horns over the eyes like the one in the film and juvenile Ceratosaurus and unlike adult Ceratosaurs.

Ceratosaurus was added to the game on January 22, 2016 as a limited tournament dinosaur. It is a legendary carnivore. It has the small horns over the eyes like the one in the film and juvenile Ceratosaurus and unlike adult Ceratosaurs. It has three long finger rather than the four short ones the real animal had. 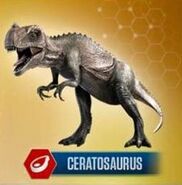 Ceratosaurus in Jurassic World: The Game.

The Ceratosaurus appears in Jurassic World: Evolution, originally seen in the second in-game trailer footage. It looks a lot like the Jurassic Park III movie version, with a red at the head with black marks and white body. However, it takes more after its real-life counterpart, including a thinner skull with more prominent brow horns.

A Ceratosaurus figure was originally going to appear in the toy line Jurassic Park: Chaos Effect, but it was scrapped and many of its features were added on to the Paradeinonychus of the same line.

A light and sound Ceratosaurus figure is part of the Jurassic World toy line. It resembles the creature, and sports the same coloration, seen in Jurassic Park III. Pressing its wound causes the toy to roar and pushing down its tail causes it to do the same action plus biting in a downward motion. It uses the roars of the Tyrannosaurus rex from the films.[6]

A new figure of Ceratosaurus will be featured in a toy line for Jurassic World: Fallen Kingdom. It will be part of the "Roarivores" line, which is made up of electronic dinosaurs with roaring sounds.

Ceratosaurus in the "Roar-avores" toy line 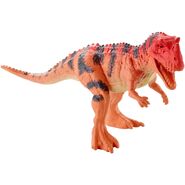 A base form Ceratosaurus in Jurassic World: The Game looks similar to a base form Carnoraptor (see the "Games" tab for a picture).

Retrieved from "https://jurassicpark.fandom.com/wiki/Ceratosaurus?oldid=233931"
Community content is available under CC-BY-SA unless otherwise noted.