Chasmosaurus is an unlockable dinosaur in Jurassic World Evolution.

Chasmosaurus fossils are unlocked once the player has building an expedition center and a fossil center on Isla Pena.

“You’ve got another three-horned dinosaur... this time a Chasmosaurus. The top of its head features a wide frill. Too thin for protection, so it is hypothesized that it’s instead used to impress a potential mate. Which on the islands, cannot happen. I’m assured. As I was before.”

"Chasmosaurus has three facial horns and a wide frill. The frill may have been for attracting mates, or identification within the herds."

"Chasmosaurus' name means "Opening lizard" due to the hole present in the frill bone structure to save weight."

Bio (With Base Stats)

Chasmosaurus eats vegetation from ground herbivore feeders, and can defend themselves against predators.

They form small social groups, and prefer smaller numbers of other dinosaur species nearby.

Chasmosaurus requires a modest area of grassland, with a small amount of forest.

Chasmosaurus was an average-sized ceratopsid dinosaur from North America. Like Triceratops, it featured three facial horns and a wide frill. The frill would likely have been too fragile for defense so may have been for attracting mates, or identification within the herds.

Its name means "opening lizard" because of the holes present in the frill bone structure to save weight. Like all ceratopsids, they were herbivores.

In 1898 the first Chasmosaurus was discovered at Berry Creek in Canada. Some complete skulls were later found in 1913, and from this the genus was named. These specimens came from the Dinosaur Park Formation of Alberta, Canada. 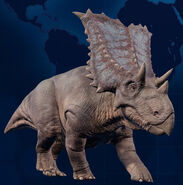 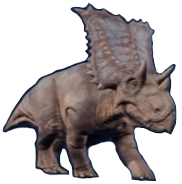 Add a photo to this gallery
Retrieved from "https://jurassicpark.fandom.com/wiki/Chasmosaurus/JW:_E?oldid=221914"
Community content is available under CC-BY-SA unless otherwise noted.