Back at Sorkin's lab, Yoder and Oscar are standing around talking, when they suddenly hear the helicopter being turned on. They run to it, seeing Nima about to take off in it. Yoder manages to jump inside it, while Oscar hangs from it. Yoder tells Nima to land the helicopter, to which she refuses. Oscar struggles to get inside the helicopter, and with Nima trying to throw him off course, things are made more difficult. He manages to pull himself in with the help of Yoder, to which he throws Nima out of the drivers seat, causing the helicopter to throw itself in the air. Yoder manages to take control of the helicopter just in time, leaving Oscar and Nima to fight it out. Nima takes out her knife and fights Oscar. Soon, Oscar nearly kicks her out the chopper and Nima throws the knife at him. He dodges the knife and knocks out Nima. Oscar then asks Yoder if everything is good. Yoder replies that everything isn't good and Oscar discovers the knife in the helicopter console. 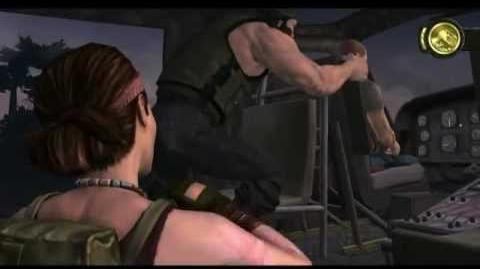