Chungkingosaurus is an unlockable dinosaur in Jurassic World Evolution.

Chungkingosaurus fossils are unlocked once the player has building an expedition center and a fossil center on Isla Muerta.

“I know this one... a herbivore called Chungkingosaurus. Can you guess where it was first found? Don't tell me scientists don't have a sense of humour.”

"Chungkningosaurus is one of the smallest known Stegosaurs. The name means "Chongqing lizard",  a reference to where the fossils were first discovered."

"In spite of her small size, Chungkingosaurus can use her tail spikes to defend herself against much larger predators."

Bio (With Base Genome)

Like other stegosaurids, Chungkingosaurus eats from ground herbivore feeders. They are armored and possess spiked tail capable of inflicting damage to other dinosaurs.

Chungkingosaurus prefers modest sized social groups. They will tolerate some other dinosaurs from other species, but don't like to feel overwhelmed.

Chungkingosaurus requires a good sized territory with plenty of grassland, an a slightly smaller area of forest.

Chungkiingosaurus is on of the smallest known Stegosaurs. It was a herbivore that once roamed China. Its name means "Chongqing lizard".

Like Stegosaurus, it possessed tail spikes to defend itself with. Its smaller size, smaller snout, and non-overlapping teeth differentiated it from Tuojiangosaurus which it closely resembled.

Material for Chungkingosaurus was found from 1977 onwards in the Chunking Group of the Upper Shaximiao Formation.

The varied dinosaur and other finds from the Upper Shaximiao Formation indicate a diverse environment. Crocodile and turtle fossils suggest plentiful water of an open nature. 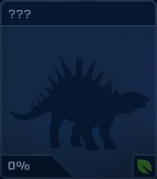 Add a photo to this gallery
Retrieved from "https://jurassicpark.fandom.com/wiki/Chungkingosaurus/JW:_E?oldid=221916"
Community content is available under CC-BY-SA unless otherwise noted.