Coelurosauravus (meaning "hollow lizard grandfather") is an extinct genus of basal diapsid reptiles, known from the Late Permian of Madagascar. Like its relatives in the family Weigeltisauridae, members of this genus possessed long, rod-like ossifications along the edge of the body. These bony rods were not extensions of the ribs but were instead newly developed bones derived from the skin of the animal, a feature which is unique to the genus and its close relatives. Coelurosauravus specimens had an average length of 40 centimetres (16 in). The body was long and flat, suitable for gliding. The skull was lizard-like with a pointed snout and contained a broad back with a serrated crest, superficially resembling the crests of ceratopsian dinosaurs. It is believed that during life, these structures were covered with skin, forming wing-like surfaces which Coelurosauravus could use for gliding, similar to living gliding Draco lizards. However, due to the larger size of Coelurosauravus, it was a less efficient glider than Draco lizards.

Coelurosauravus appears in the game as a common flock animal 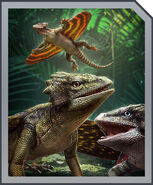