Coelurus (see - LURE - us) was a small predator that walked on two legs. Many of its bones had very thin walls, making them very light. Coelurus may have been one of the fastest of the dinosaurs, as it was lightweight and had long legs. It probably had very good eyesight as well, and may have had feathers.

Coelurus would have preferred small, easily captured prey. It is possible that it was shy and avoided contact with heavier animals, as it could not have been very strong. It is quite likely that its preferred escape method would have been a rapid retreat from any threat.

There is still discussion among researchers as to the identification of the type specimen. The most recent detailed study suggests that the four specimens, which were found in the same quarry site, are actually just one individual. It was also once suggested that Coelurus and Ornitholestes was the same creature, but a recent study concluded that they are in fact separate genera.

It is known that Coelurus were subject to cruelty at some point in the past, although it is unknown if there are any surviving populations left.[2]

Coelurus is one of the smaller predators Alan Grant expects to find fossils of at his dig site at Snakewater. These creatures could have fed on the eggs of the large Hadrosaurus herd that was nesting there. It should be noted that Coelurus lived during the Jurassic period, not the Cretaceous, so it couldn't have eaten the eggs in real life.

Coelurus (or called Coelurosaurus formerly) was mentioned in the Jurassic Park novel by Henry Wu as being in the stage of getting its DNA. The dinosaur was only presumed to be bred that way. Wu describes the "Coelurosaurus" as a small herbivore to Alan Grant and the others.

It is never seen on the animal count so it can be assumed that Jurassic Park hadn't actually bred one before the Costa Rican government destroyed the park.

Since it was never successfully bred into the park, it is unknown if frog DNA had been used to clone "Coelurosaurus" (Coelurus).

Coelurus (or Coelurosaurus formerly) is never seen or mentioned in the sequel to Jurassic Park, The Lost World. Since all of the animals in the park were first bred on Isla Sorna, it can be assumed that Coelurus inhabits that island. However, they might have died out due to their lack to reproduce, or just nesting in a different region of Isla Sorna.

Coelerus is mentioned during the game's bad ending.

Coelurus will appear in the new series of the toy line in 2019 based on Jurassic World: Fallen Kingdom. This will be the first time it will physically appeared in any Jurassic Park toy set. 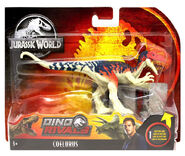 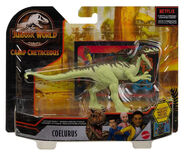