Jurassic World: The Game
Coloborhynchus was a small member of the Pterosaur family whose fossils were found in Sussex, England. 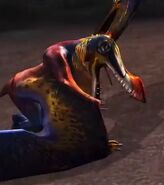