"Compsognathus triassicus. Found by Fraas in Bavaria in 1913."
—Robert Burke.(src)

Compsognathus is an extinct genus compsognathid theropod dinosaur that lived in Germany and France during the Late Jurassic period. This little pack hunter probably ate bugs and small lizards. In fact, the first fossil skeleton of this dinosaur had the remains of its last meal, a lizard, still in its stomach.

Compsognathus is one of those dinosaurs around which some controversy swirls. Some paleontologists feel that, like the much larger Tyrannosaurus, the little Compsognathus had only two fingers. Others feel strongly that it had three. Since there are only two known fossils, and the bones are not perfectly preserved in an articulated (as they were in life) manner, it may take more discoveries to solve this issue.

Compsognathus is considered an important link in the study of bird evolution. The original fossil of this dinosaur was found in the same place as Archaeopteryx, the early feathered reptile. Compsognathus shares a number of characteristics with this creature, and close relatives of Compsognathus like Sinosauropteryx that had their skin preserved show the group had downy feathers in reality. This is one of those interesting dinosaurs where scientists hope to find more specimens to learn the answers to many questions.[1]

Compsognathus was created[2] by InGen inside their compound[3] on Isla Sorna[2][3] where the juveniles were taken care of by the workers there.

It was green in color having multiple shades with dark striping across their back some also seem to have shades of red and blue as well and have a yellow underbelly.

Like all of InGen's cloned theropods, the cloned Compsognathus had pronated wrists and lacked feathers. The Compy clones seem to have only functional 2 fingers on their pronated hands with a vestigial third finger, which was once believed to be true (at least having only 2 fingers, anyway) based on a fossil, but a different fossil showed it had 3 functional fingers in life instead, making InGen's Compies inaccurate. It is slightly larger than the originals, being 1.5 meters (5 ft) in length instead of 1.2 meters (4.2 ft).[4] The Compies lived on a diet of lizards, insects,[3] and would sometimes scavenge given the opportunity. But the cloned Compsognathus would use a unique way of pack hunting to kill prey larger than them. A Compy pack would send a scout to confront the potential prey and while the intended target interacts with the scout, the rest of the pack rushes in and overwhelms their victim.[2]

They were not planned for Jurassic Park on Isla Nublar,[5] but after the 1993 incident InGen reported that there was a population of 28 individuals on the island.[6] It suggested that they managed to reach the island via hiding on InGen cargo vessels between Nublar and Site B.[6]

When the Bowman family went to Isla Sorna for vacation, Cathy Bowman encountered a Compsognathus scout on one of the island's beaches. She liked the small dinosaur and fed it some food. But to her and her family's horror the rest of the pack emerged from the nearby forest to attack Cathy, though she survived the attack.

When Cathy's parents sued InGen for the injuries she sustained from the dinosaurs, this set course the events of the Isla Sorna Incident of 1997 where InGen's CEO John Hammond was fired and succeeded by his nephew Peter Ludlow who hired a team to capture dinosaurs living on Isla Sorna for Jurassic Park: San Diego whom he wanted to revive.[2]

During the Hunters' capture of the dinosaurs on the Game Trail, hunter Dieter Stark encountered a Compy whom he attacked with his taser for the fun of it.

The hunters captured several Compsognathus and two of them were showcased by InGen CEO Peter Ludlow during his transmission to the board of his company. The Gatherers later freed at least three Compies from the encampment. The individuals in Ludlow's tent were most likely killed when the captured Triceratops freed by the Gatherers. It is unknown what became of the other individuals and whether or not they survived the chaos in the camp.

When Dieter Stark went to urinate in the woods of Isla Sorna after the skirmish at the InGen Harvester Encampment, he encountered another Compsognathus. He proceeded to tase it like he had done the previous one he encountered before. This individual turned out to be a scout and its pack pursued Dieter who had gotten lost in the woods. They attacked once he tripped on a slope while trying to get back to his group.

He managed to survive the attack and scared the pack away once he had removed them from his body. But the pack soon returned to attack Stark again at a stream where the Compies succeeded in killing him.[2]

During his stay on Isla Sorna, 12-year old Eric Kirby learned to use Tyrannosaurus urine to repel Compsognathus.

Compsognathus were present during the battle with the Spinosaurus and Tyrannosaurus rex as the smaller dinosaurs ran for their lives as the two theropods fought to the death.

When Dr. Alan Grant visited the truck that Eric was living in it a pack of Compies arrived near their location but they did not attack them and instead fed on some insects.[3]

Compies appear numerous times in Camp Cretaceous. For example, in Season 1, a Compy pops up at a vehicle being used to give the group of campers a ride to the camp itself. In Season 3, the group of campers meet a large amount of Compies at the old Visitor Center, after one of them stole a compass. In Season 4, a lone Compy stowed away on the campers' boat and is then shipwrecked on Mantah Corp Island along with the campers when Mosasaurus attacks. It follows the campers to the desert and redwood forest biomes when it is sadly killed by a BRAD in Turning Dr. Turner.

It is revealed that there are surviving Compsognathus populations on Isla Nublar, but will now face an impending danger, alongside many other creatures, in the form of an erupting volcano.

They are seen running alongside several other species from Mount Sibo.

Several Compies have been rescued from the island alongside many other species in order to be sold at auction,[7] and they are later seen running out of the Lockwood Manor after Maisie released all of the captured animals. They eventually eat some of Eli Mills’s remains after the latter was killed and devoured by the T. rex.

According to DPG, Compsognathus was subject to cruelty some time in the past.[8]

Compsognathus makes a brief cameo in the short, chasing a little girl during the end credits. 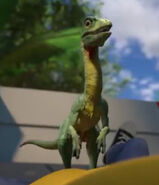 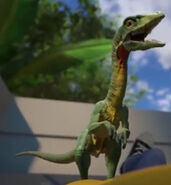 Compy Pack in the Maintenance Tunnels 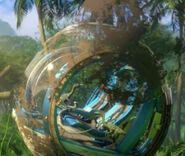 As a thank you to Steven Spielberg, Industrial Light and Magic created an animation that features a pack of Compsognathus wearing bow ties, top hats and holding canes tap dancing. It was included in Beyond Jurassic Park and in the The Lost World: Jurassic Park Blu-Ray. 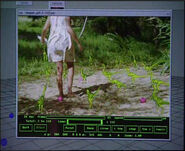 CGI production of the Compys attack on Cathy Bowman