Concavenator is an extinct genus of primitive carcharodontosaurian from the Early Cretaceous Period. It was slightly taller than a man, being no more than 20 feet long.

It was named after its distinguishing hump on its back, which was located in front of the hips. The shape was two hills, the front being taller and more visible than the one on the back, which is barely noticeable, with a U-shape in the middle, although looks less like a U-shape due to the small second hump behind the tall, frontal one. There is some speculation that it could be a thermal regulator. Another interesting fact is that it apparently sported quill knobs on the arms, very much like dromaeosaurs and modern day birds, thus leading to the possibility that it had feathers, although not completely covering the body, as it is likely it also had some scales.

Concavenator itself doesn't physically appear in the movies, although it appears as a taxidermy in the Lockwood Manor in Jurassic World: Fallen Kingdom.

Finished statue Concavenator with a sock monkey in its mouth behind J. A. Bayona. 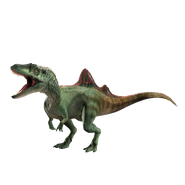 Concavenator appears in Jurassic World: The Game as a VIP carnivore.

A new Concavenator is coming out for Mattel's line of 2019. This is the first time it has ever appeared in any toyline. 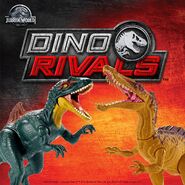 A Concavenator in the Jurassic World Facts apps. 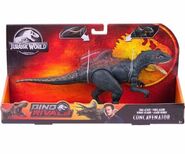 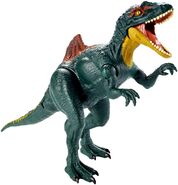 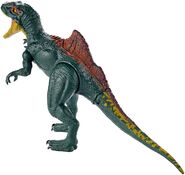