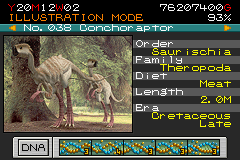 Conchoraptor was an oviraptorid dinosaur from the late Cretaceous Period of what is now Asia. Its name reflects the hypothesis that oviraptorids, rather than preying primarily upon eggs as had been traditionally thought, may have been specialized to feed on mollusks. Conchoraptor can grow up to 3.3-6.6 feet in length.

Conchoraptor has never appeared or mentioned in any Jurassic park films or books, it has however appeared in Jurassic Park III: Park Builder.

Retrieved from "https://jurassicpark.fandom.com/wiki/Conchoraptor?oldid=238210"
Community content is available under CC-BY-SA unless otherwise noted.