The Cretaceous Cruise is a Jurassic World attraction, allowing tourists to kayak around Isla Nublar, taking a look at the dinosaurs. This attraction will allow guests to paddle their own kayak and float down the river. The river will go through The Aviary and into many different dinosaur habitats for guests to view the over 100 types of dinosaurs and prehistoric flora and fauna. The Cretaceous Cruise is located on the north-eastern side of the island. It is the home of Apatosaurus, Baryonyx, Metriacanthosaurus, Microceratus, Parasaurolophus, Stegosaurus, and Suchomimus. 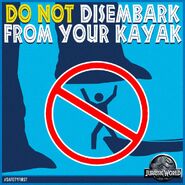 People kayaking down the river

The cruise with the Stegosaurus and Apatosaurus in the same spot as the first trailer, an Apatosaurus crossing the river, and Parasaurolophus in the far background
Add a photo to this gallery

This attraction is based on the Jungle River Cruise, a planned ride from the original Jurassic Park.

Retrieved from "https://jurassicpark.fandom.com/wiki/Cretaceous_Cruise?oldid=205889"
Community content is available under CC-BY-SA unless otherwise noted.